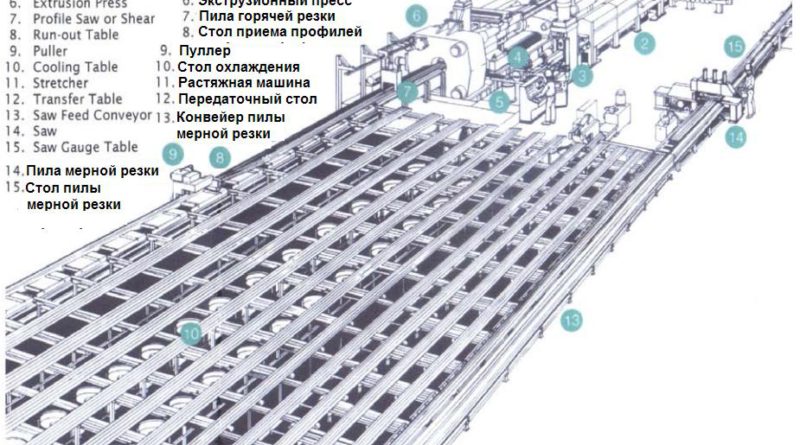 Demand from mnogoochkovoy matrix uniform flow to all points can only be, when it is mounted on the press, which is well verified. The stricter tolerances on the dimensions and profiles of thinner wall sections, the more critical it becomes a good alignment of the press.

Poor alignment of the press

Poor alignment of the press, It can be the cause of such problems, as the uneven wear of the parts and damage of the pressing tool. The result of misalignment of various parts of the press can even be a slight jerking or shaking of the ram (in English - popping) during its working stroke.. Thus the press itself adjusts its movement.

Typical general view of the direct action of the extrusion press is shown in Figure.

The basic 3-dimensional geometric relationships between the components of a conventional aluminum extrusion press are as follows.

Reconciliation of fixed parts of the press

1) The bed of the press must be aligned in a horizontal plane and all its support points must lie in the same plane.

2) Back and front crossmembers must be perpendicular to the bed, both cross - parallel to each other.

4) The guides of the container must be straight and parallel to the frame, and symmetrically arranged with respect to the press center line.

5) Master cylinder, master cylinder sleeve, the flange and the main plug must be concentric and coaxial with each other, and also perpendicular to the rear crossmember.

Reconciliation of the moving parts of the press

1) The main plunger and ram must move along the center line of the press along the entire stroke length.

All these mutual ratios of the various components of the press must be performed at the operating temperature of the press, as well as various working positions and efforts ram.