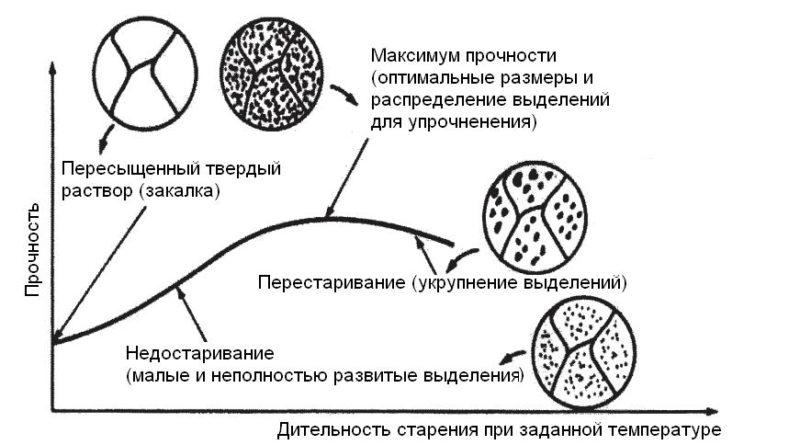 “Disperse hardening” or “hardening of aging”?

As a result of appropriate heat treatment, the atoms of these alloying elements dissolved in aluminum gradually form a kind of clusters in the form of very small particles, which stand out inside the grains of aluminum “die”. This process is called so and is called – “excretion” (precipitation). This particle release is a metallurgical process (phase change), which happens for the following reasons:

Term “aging” (aging) reflects the fact, that this hardening process does not occur instantly, as is the case with steel hardening, in slow enough and for some time, hours, days, weeks, months. Note, what's the word “ageing” apart from meaning “aging” there are other meanings – aging, aging (for wine) and, even, growing up, which more positively and optimistically reflect the essence of this process.

The speed and degree of hardening increases, if the alloy is aged at elevated temperatures, for example, 200 degrees Celcius. This process is called “artificial aging” in contrast to the aging process at room (workshop) temperature, which is called “natural aging”.

Metallurgy of thermal hardening of aluminum

The main metallurgical property of aluminum alloys, which are capable of hardening by heat treatment is:

Historically, this was first identified in the Al-Cu alloy. A schematic phase diagram for Al-Cu alloys is shown in the figure. 2. It is a classic eutectoid system, but for the theory of thermal hardening, only its part with a high aluminum content (low copper content) is of interest. Consider below an alloy with a chemical composition of Al + 4% Cu. 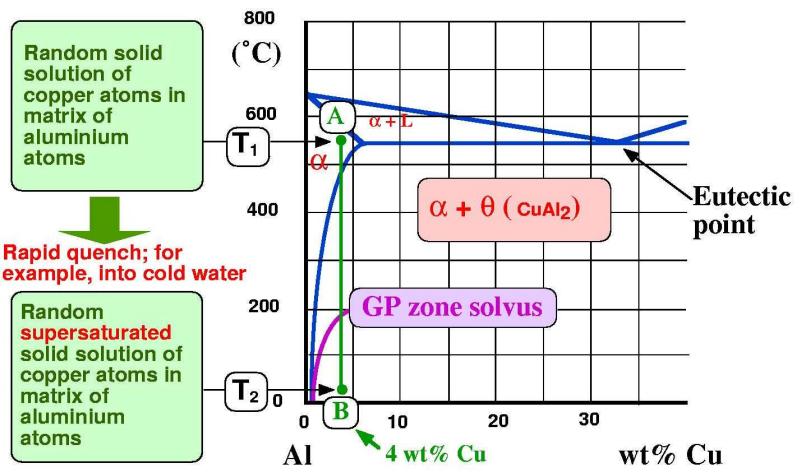 With very slow cooling of the alloy from temperature 550 degrees Celsius, an equilibrium microstructure is formed, which consists of an alpha phase with a very low content of dissolved copper together with coarse particles of the equilibrium secondary phase CuAl2, which formed mainly at high temperatures during cooling from about between 450 to 300 degrees Celsius (figure 3). This equilibrium structure (denoted by the letter D in the figure 3) is stable at room temperature, but it is not very durable and therefore practically does not represent an engineering interest. 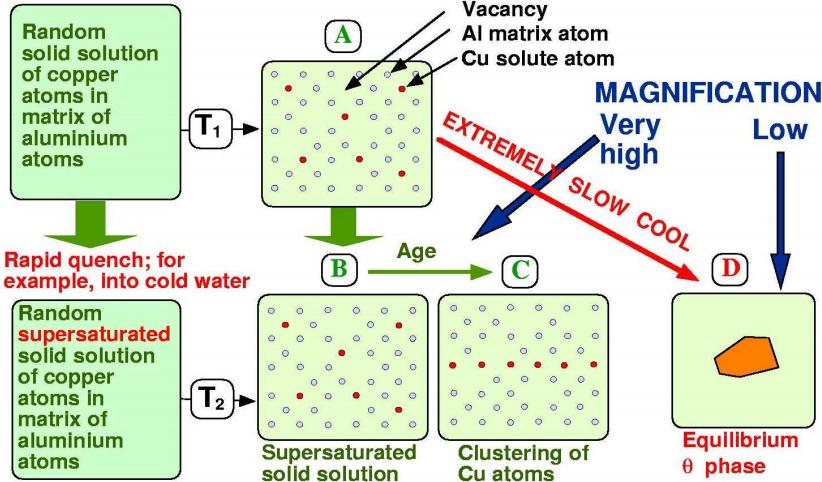 The situation is changing radically, when the alloy is rapidly cooled in water from the quenching temperature 550 degrees Celsius to room temperature.

Rapid cooling from point A to point B (cm. drawings 2 and 3) “freezes” solid solution in that state, which was at 550 degrees Celsius. Of course, it can no longer be an equilibrium state. they say, that the quenched (cooled) alloy is in the metastable state of a supercooled solid solution. It means, that this microstructure is thermodynamically unstable and the alloy in this state has a metallurgical driving force to move (change) towards an equilibrium structure. At elevated temperatures, for example, 150 degrees Celsius, this process is much faster, than at room temperature, since copper atoms and vacancies in the aluminum matrix diffuse much faster. Copper atoms are collected in clusters (GP-zones) and these clusters have the form of precipitates from a solid solution. In Al-Cu alloys, these clusters are in the form of plates, in Al-Zn alloys – spheres, and alloys Al-Mg-Si – rods (figure 4). 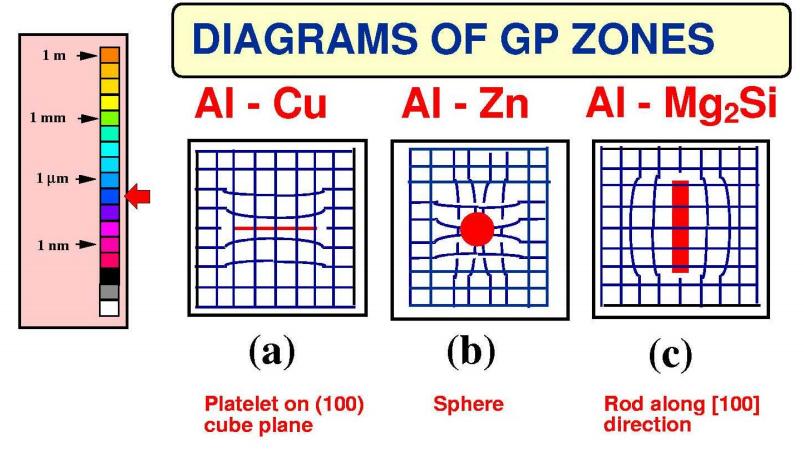 Heating for quenching: alloy is aged at a temperature, at which a homogeneous single-phase state is achieved.

Hardening: rapid cooling of solid solution, for example, immersion in water, directly at the exit from the oven or extrusion press.

A supersaturated single phase solid solution is unstable below the solvus line in the equilibrium diagram. This one-phase state has an "innate" tendency to transition to a two-phase. This can be achieved in two ways..

Aging at room temperature: slow – during few hours, days or weeks – loss of secretions, resulting in an increase in hardness.

Includes heating to a temperature below the solvus line; heating promotes more efficient formation of formations and secretions.

Discharge first, which are coherent with the aluminum matrix - they have the same crystal lattice, as the matrix. These coherent phases cause stress in the matrix, which become effective barriers against plastic deformation through the movement of dislocations. When this discharge gets large enough, they become incoherent and form a separate phase. Stresses are decreasing, and the metal becomes softer again, although in any case remains firmer, than in the solid solution state, due to stresses, which inevitably occur around the discharge. 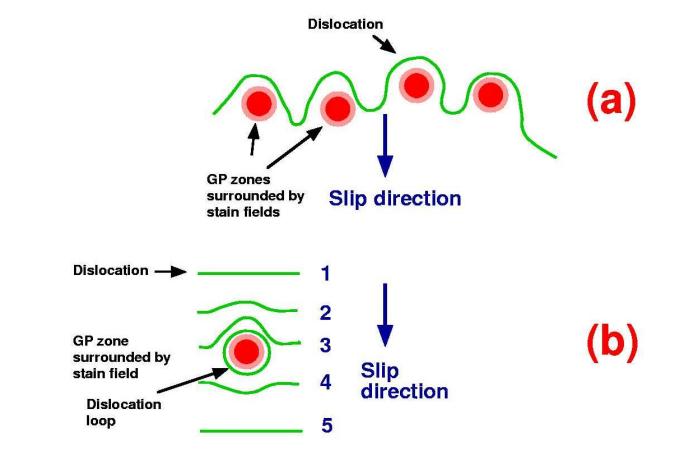 Figure 5 – The mechanism of cluster resistance to dislocation motion [1]

Typical graphs of changes in strength and hardness under various aging modes of a hypothetical Al-Cu alloy are shown in the figure 6. 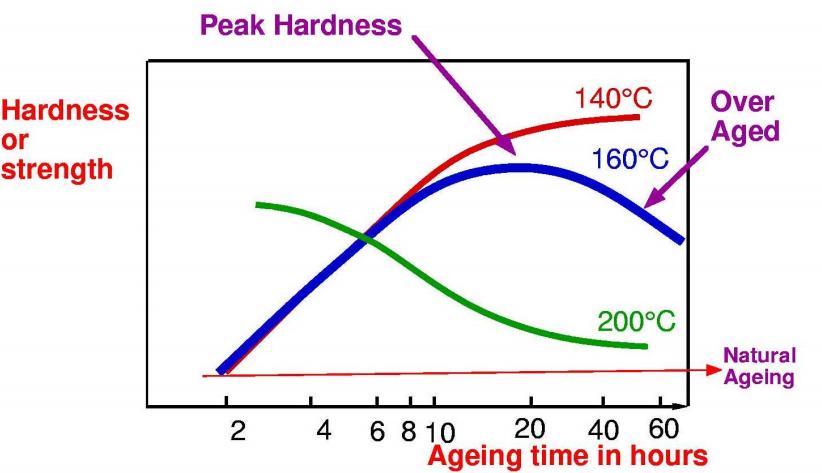 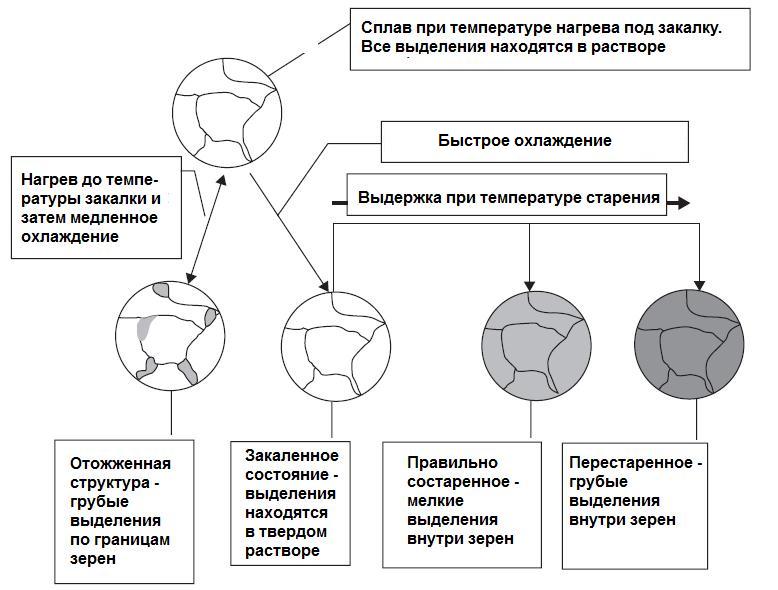 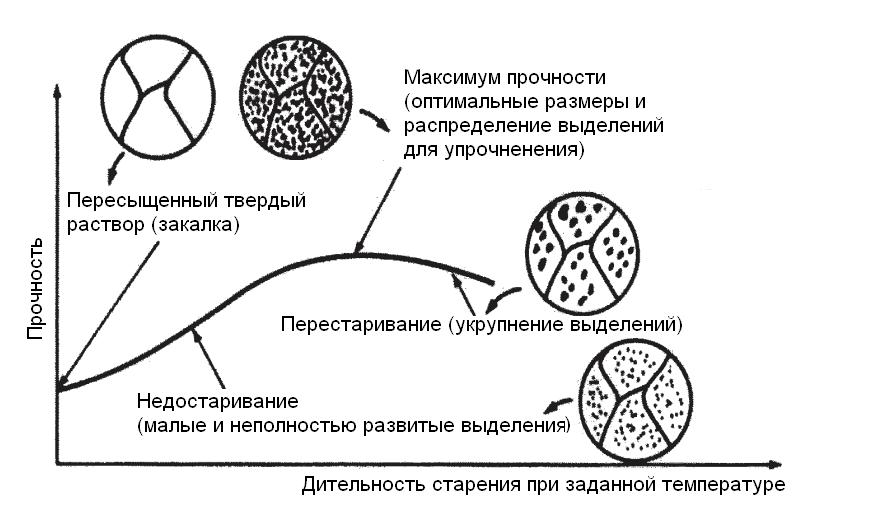 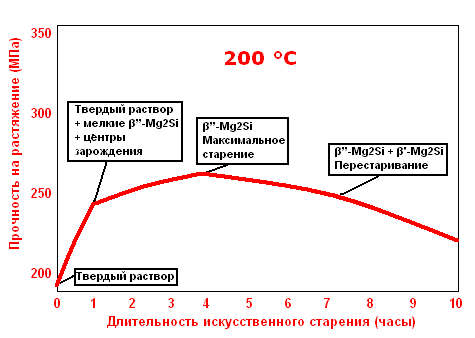