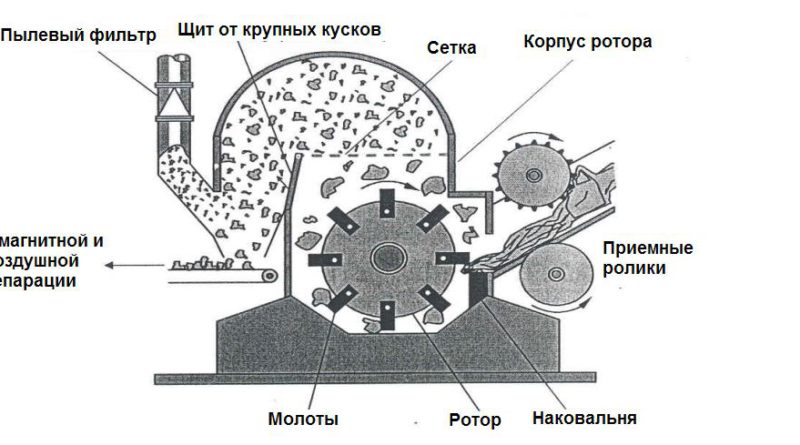 Physical sorting technology of aluminum scrap is usually applied only to this scrap, held grinding step.

Details of sorting and recycling of aluminum scrap:

for instance, all automobile scrap in the US - the most numerous - before sending it for processing are subjected to grinding – shredding. Companies large special machines used for grinding automotive scrap with hammer and anvil – shredders. Before you load the cars in the car they are subjected to dismantling major units, for example, engine block, gearbox, body. Naturally, remove the wheel centers and rubber tires. These powerful monsters break all, that gets them into pieces no larger than 100 mm (figure 1). 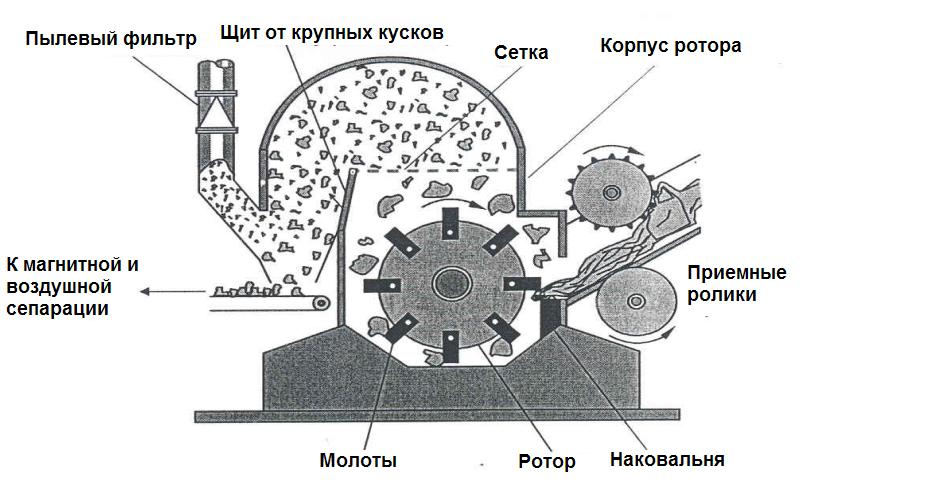 Magnetic sorting is the separation of ferrous scrap by scrap other metals, stainless steels and non-ferrous metals. When mixed scrap passes on a conveyor past the magnet, the ferrous metal, carbon and alloy steel, as well as cast iron, attracted by the magnet and dropped to another conveyor, and non-magnetic pieces of scrap fall into the container (Figure 2).

When air classification using various methods. A popular method is an absorption method, to capture light materials, that are in particulate mass, car, scrap. Such materials are, for example, plastic, tires and high foam. The differences in the density of different materials, which may be in the unsorted scrap aluminum, are shown in Table.

The disadvantage of air separation aluminum scrap is, it may not work for light beer cans and small particles of crushed aluminum scrap. 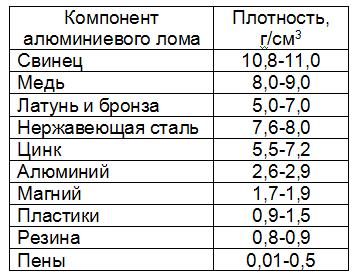 Sorting using eddy current effective, when mixed in the crushed aluminum scrap has a lot of different metals, other than aluminum and its alloys. The rotor with magnets mounted on it excites the magnetic field, which repels non-magnetic electrically conductive metals with varying strengths and leaves non-metallic materials intact (Figure 3). 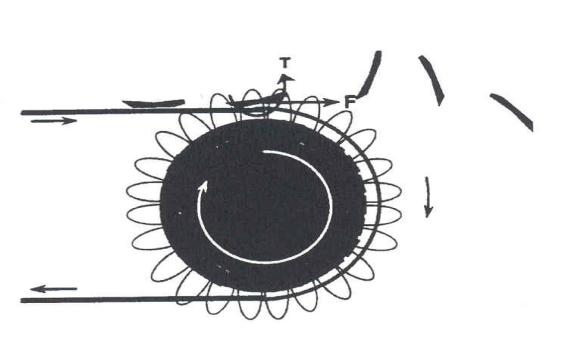 The disadvantage of this method is, that some of the components of scrap metal, such as wire and foil, often do not lend themselves to eddy current separation, as they appear too small eddy currents.

Gravitational sorting technology uses aqueous compositions of materials of known density, to separate non-magnetic materials with different densities. for instance, in the case of the crushed road aluminum scrap many of its components have different density values.

A typical process for this gravity sorting involves three steps:

A disadvantage of gravitational sorting method is the high cost of maintaining a constant density of the solutions, and poor separation and floating hollow, for example, in the form of "boat", scrap components.

Sorting of scrap aluminum color often produce manually. This is especially true of developing countries, such as China, with very cheap labor (figure 4). 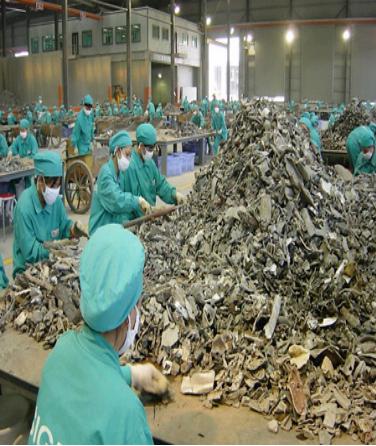 It is believed, that the possibility of such a hand - literally hands - branches of non-ferrous metals aluminum up 99 %! Besides, wrought and cast aluminum alloys also have differences in texture, color and other characteristics of the surface, which makes it possible to separate them.

In this method, the laser pulse hits the spectroscope in the metal surface, It produces emission of atoms and receiving chemical information about the material their spectral sensor. If the spectrometer is installed in the sorting line of aluminum scrap, then it generates a signal to a mechanical device to direct the investigated scrap component to the desired container (Figure 5). 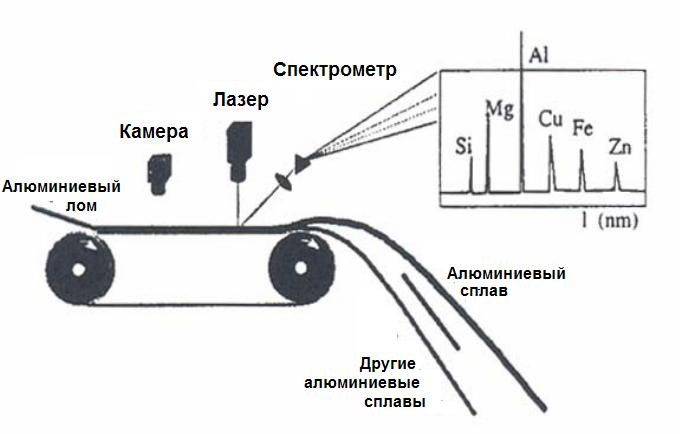 A similar method is used on portable laser spectrometers for sorting of bulky aluminum scrap.

The thermomechanical method is intended for separation of wrought and cast aluminum alloys. It is based on a low eutectic melting point of the casting aluminum alloy with high silicon content. This method is, that mixed aluminum scrap is kept at a temperature slightly below the eutectic temperature (about 550 ºS). This leads to a softening of aluminum castings at their grain boundaries. Subsequent grinding or mechanical flattening leads to destruction of these alloys into small pieces. Then these small pieces are separated from the rest of the scrap mass by methods of sorting scrap components according to their size (Figure 6). 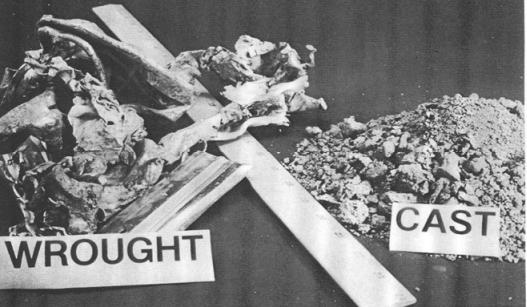