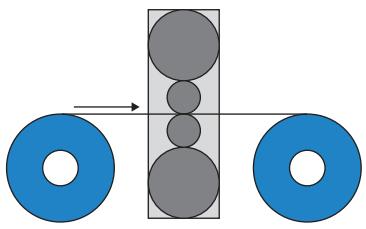 Aluminum sheets - normal and thick, as well as foil manufactured by rolling a fairly thick aluminum billet - the ingot or intermediate semifinished – tackle - between the rolling rolls so, to reduce the thickness of the workpiece. wherein the workpiece length is increased. This is where something like a dough sheeting, when rolled cakes puff cake. But, of course, aluminum rolling much harder.

aluminum pass through the mill is only one step - albeit the most important - in the serial chain of technological stages of production of rolled aluminum. I like the aluminum flat-rolled gets its final properties, not only during the actual rolling, and in close cooperation with the preparatory technological stages:

and after the rolling operation, such as the:

Modern mills for rolling aluminum is carried out most or all of these operations for the production of sheet products and foil having the desired dimensions, properties and other characteristics, which are defined by the customer.

Aluminum - is still a very young metal. It was opened in 1807 year, identified in 1825 year, and produced a small amount as a precious metal - in 1845 year. aluminum industrial production was only possible after the discovery of the method of Hall-Eruv 1886 year. Since then, the use of aluminum began to grow rapidly, and she became after a second iron-steel industrial metal.

Aluminum Co. occurrence time on an industrial stage, Humanity has had a thousand-year experience of casting and forging metal, as well as a few hundred years of dating with their rolling into sheets and even the foil. metal rolling has been mastered in the more developed countries in the 16 century. All of these known methods of treatment of metals have been adapted and tested on aluminum.

The first aluminum pan was stamped the 1890s and the beginning of the 20th century, almost all of the aluminum was in the manufacture of such kitchen utensils.

The first aluminum boat with an aluminum sheet were built 1890, including racing yacht "Defender" in 1895 year.

TO 1903 year is consumed annually in the world around 3 thousand tons of aluminum, about a third of them - in the form of a sheet.

That same year, the first aluminum foil was rolled in France. In the US, production began in aluminum foil 1913 year - for wrappers of sweets and chewing gum.

Thin aluminum skin of the aircraft appeared in 1917 year.

An industrial method for the production of high-strength aluminum sheets coated with various aluminum alloys (Alclad) to improve corrosion resistance originated in the United States in 1926 year.

Fundamental principles and structures for metal rolling mills have been set at the end of the 19th century, but the improvement of their technology and the industry continued throughout the 20th century.

aluminum rolling direction developed in quality and efficiency taking into account both their own peculiarities, and innovations and developments in general in metal rolling.

Hot and cold rolling were introduced continuously in operation in the USA 1926 year. The maximum speed of the first rolling mill was about 60 m per minute. Modern mills rolled aluminum sheets 35 times faster.

Standard two-roll and four-roll configuration of rolling mills were invented in the early twentieth century, but still remain the basis of the rolling industry. In recent decades, there were various "cluster" structure mills, Workers who use support rollers by two or more support rollers.

Aluminum sheet begins with thick - 600 mm - ingot and a half kilometer can travel through rolling mills, oven, saws and straightening machines, to leave a thin sheet of thickness a few tenths of a millimeter. And that's not to mention the fact, how to pass the starting ingot, before it enters the first rolling stand.