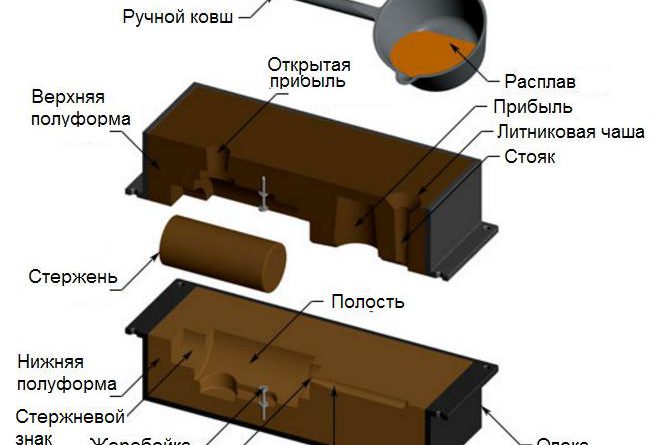 Sand molds are widely used in the casting of castings, both from casting aluminum alloys, and almost all of cast metal. Let us consider the following example for its casting aluminum.

at aluminum sand casting the main component of foundry equipment is the mold, which consists of several components. Sand mold consists of two halves - the upper mold and lower mold, which are connected along the plane of the connector (figure 1 and 2). 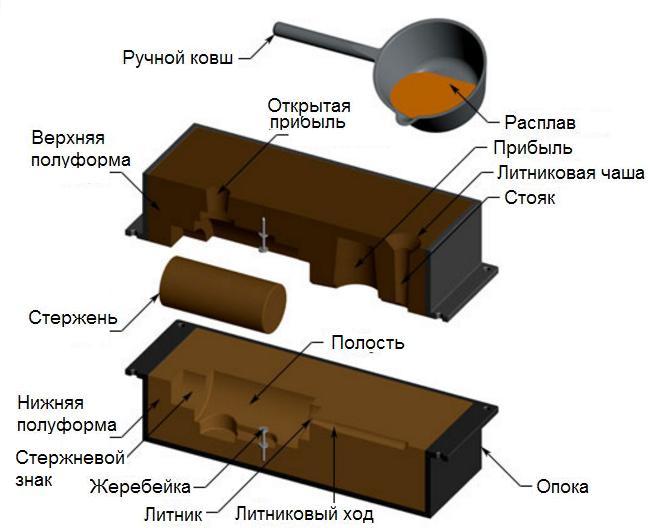 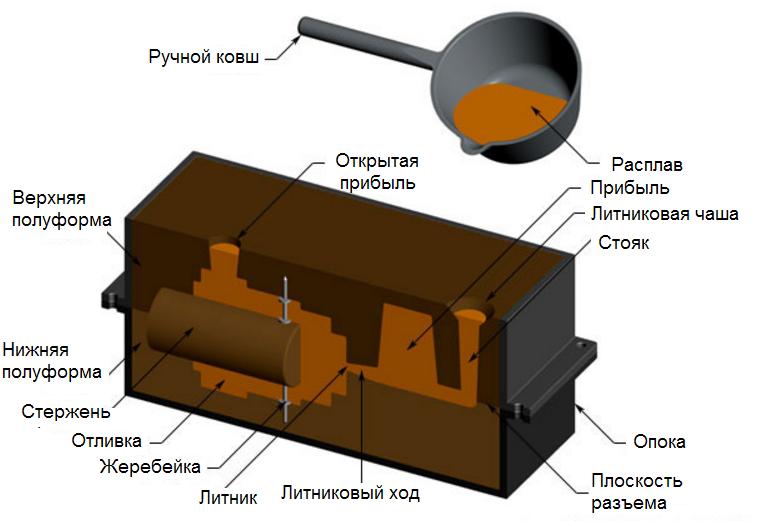 Both halves of the sand mold are inside special drawers, called flasks. The upper mold is in the upper flask, the drag - in the lower flask. The upper and lower flasks are also divided by parting plane.

A mold cavity formed by the seal - stuffing - moldable mixture - sand - around the casting model in the upper and lower flasks. Typically, sand is packed by hand, but on large production of special machines used, which apply pressure or shock even for compacting sand and make it faster, than manually.

After that, as the sand which is sealed and removed from the model form, sand in the upper and lower mold halves remain prints outer shape model. The internal surface of the casting is formed with the aid of special casting equipment components - rods.

Cores or just bars - these are additional details sand mold, which are intended to form the internal openings and channels of aluminum castings. Usually, cores are also made from sand. Sand cores allow to produce very complex internal parts casting.

Each casting core is set in the sand mold prior to pouring molten aluminum. To ensure that the installation of the rod in a strictly predetermined location, to model for him include grooves – rod signs. In these grooves rod securely installed in the right place.

However, even when installed in a pivotal pin marks may be shifted, for example, float under the influence of buoyancy forces in the molten aluminum. With these problems less aluminum, than with other metals. The thing is, that the greater the density of molten metal, the more these buoyant forces.

Therefore for added support rods are used special devices - chaplets. Chaplets - are small metal parts, are mounted between the rod and the surface of the mold cavity. Chaplets are made from metal with a higher melting temperature, than that of the cast melt. After solidification within the casting chaplets are, and excess material zherebeek, which stands for the casting of the border, removed during its stump.

Furthermore sand cavities for forming the outer and inner parts aluminum casting it has a special design, which provides a flow of molten metal with predetermined parameters.

The runner cup and riser

Molten aluminum is poured into the sprue cup, which is an extension of top sand mold. The molten metal is moving from the bottom of this cup down the main channel, which is called the riser. The riser is connected with a series of channels, called the runner moves.

Pouring the melt passages lead to the mold cavity, which forms the outer and inner casting elements. At the end of each runner running runners located, which control the rate of metal flow and reduce turbulence of flow.

By gating system moves often connected income. Profit - a camera, which are filled with liquid metal and serve as an additional source of metal during solidification. Upon cooling and solidification of the metal volume is reduced, and profits give additional molten metal to fill in a form.

Finally, in the form of sand there are small channels, which extend from the mold cavity outwardly. It - vents, that allow gases to get out of shape out. The porosity of the sand also gives the opportunity to escape to the outside air, but additional vents also sometimes necessary.

Molten aluminum in all channels of the mold - standpipe, gating passages and profits - solidifies and forms a cast integrally. After extracting the casting from the mold, this "extra" aluminum removed as a result of operation stumps.

The types of sand molds

silica sand normally used for the production of foundry sand molds, which is mixed with different types of binder materials, which help to maintain the shape of the mold cavity. Often such a bonding material is common clay. Therefore, the casting sand molds is also called sand-clay forms.

The use of sand as a molding material molds has several advantages. At first, Sand is very cheap. Secondly, it is resistant to high temperatures, it can be used for the casting of many metals with high melting point. Preparation sand for foundry molds are various ways depending on the type of the sand mold. There are four main types of sand forms:

To manufacture moist sand molds used moldable mixture of sand and water, as well as clay or other binding material. A typical composition of such a moldable mixture consists of 90% sand, 3% water and 7% clays. Raw sand molds are the cheapest and most widely used.

Production start-dried form as a crude sand mold, to which further added to the special binders, a mold cavity surface is dried with a burner or a blowtorch to increase its strength. Moreover, increased dimensional accuracy and quality of the casting surface. Dried sand molds more expensive and time-consuming and, therefore, reduce casting productivity.

In dry sand mold, sand mixed with only an organic binder. This mold is reinforced by baking in an oven. Finished dry sand molds ensures high dimensional accuracy. The disadvantages are higher cost and low productivity.

In this sand mold sand is mixed with liquid resins, and solidified form at room temperature.

The ability to keep the sand predetermined shape.

The ability to pass through itself sand entrained gases melt, which are released during solidification. High permeability may decrease the porosity of the casting, and low permeability may give a better surface quality. The degree of permeability dependent on the size and shape of grains.

The ability to resist damage to the sand, for example, rastreskivaniю, by heat of molten metal.

The ability of the sand to sink or more tightly compressed during solidification. If sand is not hardly began, the cast would not have the opportunity to freely shrink in size within the mold, and this would lead to cracking.

The ability of the sand for reuse in the next batch of molds.

More about sand casting of aluminum: