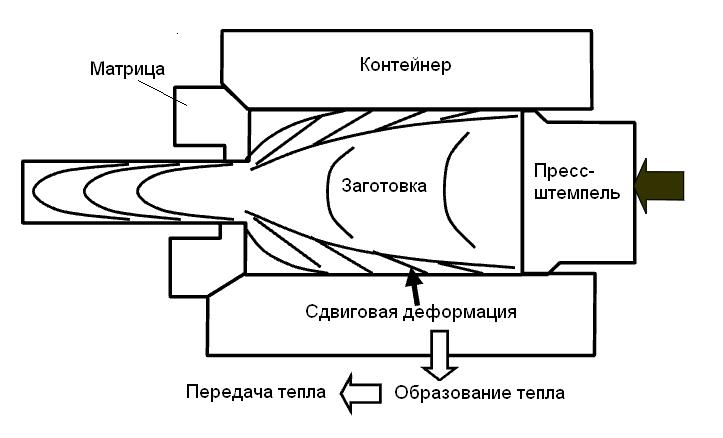 Friction between workpiece and container

During direct hot pressing of aluminum, the heated billet undergoes comprehensive compression in the container as the press stamp moves from the container inlet towards the die. As a result of this, the extrusion of the metal occurs through the hole in the matrix..

Figure - Deformation of the workpiece in the container
with direct extrusion of aluminum [1].

Due to heat, which arises as a result of friction and plastic deformation, workpiece temperature usually increases when approaching the matrix. The temperature of the profile at the exit from the matrix also increases. However, to get profile properties, including, strength, the same over their entire length, it is necessary to maintain their temperature at the exit from the matrix constant. This is especially important for structural aluminum alloys., for example, for those, of which automotive parts are made. To achieve such isothermal pressing, it is necessary to understand well the processes of friction and heat generation at the boundary between the container and the workpiece.

The article "Analysis of the extrusion process"

The issue of friction between the workpiece and the container is central to our reader’s article, Boris Nudelman's Analysis of the Extrusion, which we bring to your attention. The author examines the process of direct extrusion (direct pressing) analytically with the involvement of a rather complex mathematical apparatus. The author analyzes and criticizes the existing models of the friction process between the workpiece and the container and offers his model of the action of the friction forces of the workpiece on the container and press washer. The study of this model showed, in particular, that the action of friction forces is manifested only in the area of ​​the workpiece, which is close to the press washer.

Together with the author, we ask you to read this article and send it to us info@aluminium-guide.com your criticisms. We look forward to an active and constructive discussion of this article..

Article received by us 7 May 2017 of the year. Spelling and style of the author are fully preserved.

Our opinion may not coincide with all the provisions of the article and we are not able to fully understand all the mathematical calculations, but, anyway, careful study of it helps a better understanding of the processes, that occur during extrusion of aluminum.

We will publish the results of the discussion of this article on our website..