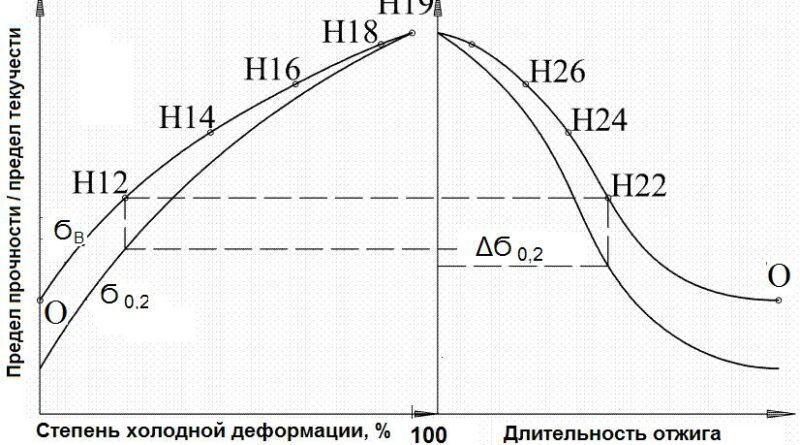 cold-worked condition aluminum and aluminum alloys - they are also called “H-state” - applied to aluminum products, which have undergone plastic deformation with strain hardening (work hardening). These products can also be subjected to a partial annealing. This annealing is called partial, because it is designed to partially reduce the strength (hardness) of the metal. This operation is also called the softening of the metal.

There is also a group of unstable states W: treated for solid solution and naturally aged. These conditions are rarely used and are, rather, technological, than in terms of delivery.

What does the state of the aluminum alloy

Each variant of the state designation "informs" about the technological history of the aluminum product - the type and sequence of technological operations and their parameters: plastic deformation (hot or cold), the degree of deformation, heating (temperature, duration of heating and holding), cooling (speed or duration).

The designation of cold-worked states of aluminum alloys consists of the first letter H (from the English words hard, hardening, hardened). Directly after the letter H, two or more digits are without space, which define the state of cold-worked variant.

Note in the order or contract alloy designations together with the designation of state uniquely determined by the specified mechanical and physical properties of aluminum products.

The first digit after the letter H

The first letter after letter H indicates the status, which arises as a result of some combination of basic technological operations:

Н2Х: cold-worked and partially annealed. These states are used to refer to aluminum products, which is subjected to cold plastic deformation to a level higher strength, than its ultimate strength and then subjected to a partial annealing to lower the strength to a predetermined level.

Н3Х: work-hardened and stabilized. These conditions are applied to aluminum products, which is subjected to cold plastic deformation and then its mechanical properties are stabilized by low-temperature heat treatment or by heat, arising during manufacture.

Н4Х: cold-worked and varnished. Used for aluminum products, which is subjected to cold plastic deformation and then a special lacquer coating. for instance, tapes from alloy 5xxx-Nxxx for lids of aluminum cans for drinks ("beer cans").

Details about the conditions, see. in European Standard EN 515.

The second digit after the letter H

The second digit after the letter H in designation aluminum alloy cold-worked state indicates a finite degree autofrettage, which corresponds with the minimum value of tensile strength.

The second digit 8 denotes the "strongest" condition (but not yet maximum) for a given alloy.

The second digit 9 denotes fully cold-worked state above autofrettage. It, for example, used for alloy 3104, which is for the manufacture of housings aluminum “beer” cans: 3104-H19.

The state between the O (annealed) state and the H8X state is indicated by the second digits from 1 to 7.

HX represents temper of the alloy, in which the tensile strength is in the middle between the outside and O states strength HX8.

HX2 refers state, in which the tensile strength of the alloy is approximately in the middle between the outside and ON states strength HX4.

HX6 denotes state, in which the tensile strength of the alloy is approximately in the middle between the strength HX4 and HX8.

HX1, HX3, HX5, HX7 denote an intermediate state between those states, are defined above. Note, that these conditions are not specified in EN 515, but sometimes used by agreement between the manufacturer and the customer.

The third number after the letter H

The third digit after the letter H (when applicable) indicates a condition variant, to which the first two digits indicate.

State HX11 applies to products, which after final annealing receives an amount of cold plastic deformation, that can not be considered in the temper O, but, However, this amount is not enough, to assume a state of the state HX1.

Status H112 used for the production, that can receive a certain peening by treatment at elevated temperature or at a limited number of cold plastic deformation and which does not set the upper limits of strength properties.

Aluminum alloys and their status in the beer cans