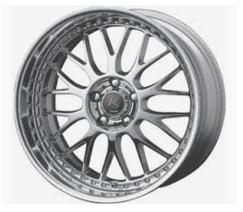 magnesium and its application properties

The overwhelming part of magnesium produced in the world goes to alloying aluminum alloys and only about 15 % - on construction products, mainly in the form of castings. Magnesium and its alloys are used in the form of car parts, including, wheels, elements of industrial equipment, kitchen equipment, computer parts and mobile phones and, even, stairs [1].

Magnesium is easily cast, machining and welding. It has a relatively high electrical and thermal conductivity. Magnesium alloys have a very good ability to absorb mechanical energy: magnesium castings are used as products for work in high vibration conditions.

For many years one of the main disadvantages of magnesium alloys is corrosion. Magnesium anode takes the highest position in the galvanic series. therefore, as shown, on the image 1, It may be subjected to severe corrosion.

magnesium corrosion problems occur because of the strong influence of impurity elements, such as, iron, Nickel and copper. Figure 2 shows, how much influence the content of iron in the magnet on its susceptibility to corrosion. However, the use of high-purity magnesium alloys results in the achievement level of corrosion resistance, close to, which have competing aluminum casting alloys (Figure 3). 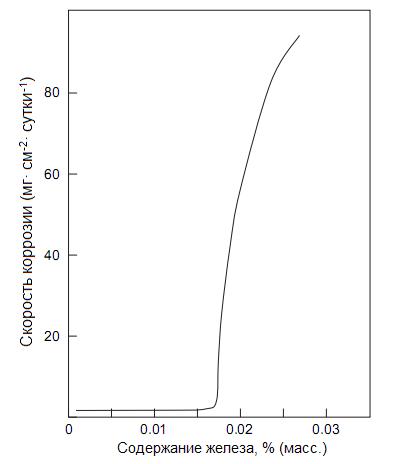 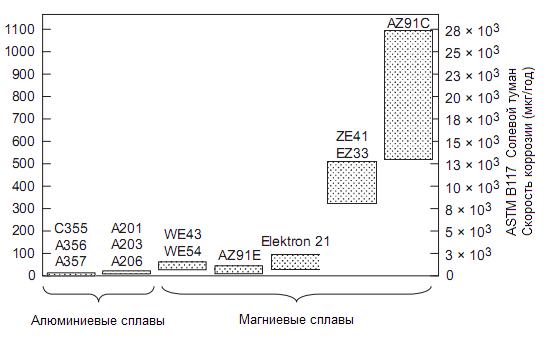 The crystal structure and properties

Moreover, compressive yield strength product, obtained by the methods of metal forming, It is only about 40-70 % of the yield stress in tension. During the heat treatment the individual crystals are deformed directly by the primary slip planes and the main plane of the sliding takes place so, they are oriented parallel to the direction of the deformation processing. This arrangement reduces the grain compressive strength. Since such a texture in the casting is not formed, the compressive yield stress is approximately equal castings a tensile yield strength. For this reason, as well as due to the fact, that of wrought alloys products are more expensive, than similar aluminum products, casting of magnesium alloys are used much more widely, than other types of magnesium products.

Magnesium has a very low melting point (650 ºC), that increases its susceptibility to creep at elevated temperatures. However, improved by alloying methods resistance to creep magnesium alloys can be significantly improved. The most important alloying additives are magnesium aluminum, zinc, and zirconium. Aluminum provides hardening due to creation of a magnesium solid solution hardening and expansion interval, that makes the alloy more convenient for casting. When adding aluminum to magnesium increases its strength constantly until the aluminum content 10 %, but the peak elongation occurs at about 3 % aluminum:

However, zinc is the cause of hot cracking, if it exceeds 1 % in alloys with aluminum content of 7 to 10 %. Zinc, Besides, improves corrosion resistance by combining with harmful impurities iron and nickel. Zinc is also used together with zirconium, rare earth element, or thorium to obtain thermally hardenable magnesium alloys.

To improve the corrosion resistance of Mg-Al and Mg-Al-Zn magnesium alloys the manganese additive used to remove the iron by the formation of intermetallic compounds harmless. The amount of manganese, which may be added, limited 1,5 % due to its low solubility in magnesium.

Silicon significantly increases the fluidity of the molten magnesium, increasing, thereby, its ability to cast. However, silicon in the presence of iron reduces corrosion resistance of magnesium. Silicon also provides increased resistance to creep.

Zirconium is a powerful grinder, as shown in Figure 4. However, zirconium can not be used in combination with aluminum or manganese, since it forms a brittle intermetallic compound, to "destroy" the plasticity. Outstanding effectiveness zirconium in molten magnesium grinding grains can be explained by the strong similarity of crystal structure and atomic lattice parameters of these two elements. 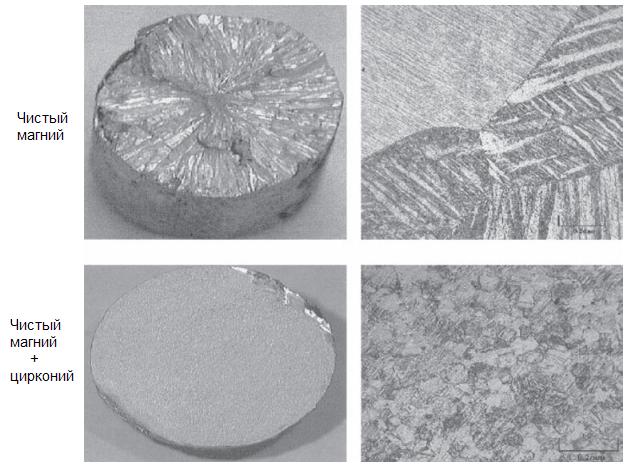 Zirconium is such an important dopant, that it was developed by a series of magnesium-zirconium alloys without the presence in them of aluminum. Zirconium additions are usually kept below 0,8 %, since at higher concentrations it easily forms a compound with iron, aluminum, silicon, carbon, oxygen and nitrogen, and also reacts with hydrogen to form a hydride, which is not soluble in magnesium.

The elements iron and nickel are harmful impurities, which significantly reduces the corrosion resistance. Copper is also often considered, together with iron and nickel, as pollution, but in some magnesium alloys, it is used as an alloying element. Iron is the most problematic of the three, so as nickel and copper are more easily controlled by selecting the degree of purity of starting materials. Iron control additives by MnCl2 the melt during casting.

Although magnesium alloys produced in the form of deformable, and foundry alloys, but casting alloys are used much more widely. Some of wrought alloys are strengthened by cold deformation, whereas others - by thermal treatment c hardening mechanism of aging.

Casting alloys are used in various states: casting, annealed or aged. These alloys themselves generally fall into two classes: alloys with aluminum and alloys with zirconium.. Tensile yield strengths of magnesium alloys are typically in the range of from 70 to 345 MPa, beyond strength - from 140 to 380 MPa, and the elongation of the 1 to 15 %.