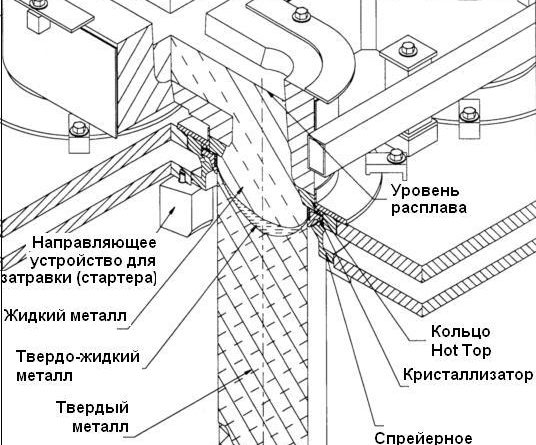 Casting table vertical casting machine - a design, which is designed to accommodate the mold and the cooling water distribution system for the uniform supply it to each crystallizer.

There are two types of casting tables:

For both types of tables, accurate and rigid installation of the casting table molds relative to the dummies (starters) on the platform is important.. This accuracy must be within 0,1 mm.

There are two main casting systems:

Moreover, Thermal overload casting systems are subdivided according to the systems for lubricating the melt in the mold:

Float injection system - an open-top systems - is an old proven technology, which is still widely used in 1980-90 years. Currently, in Europe and North America are commonly replaced by a molding system with thermal nadsadkami.

The figure 1 shows a photograph of the casting table with a float casting system during casting of aluminum ingots-pillars. 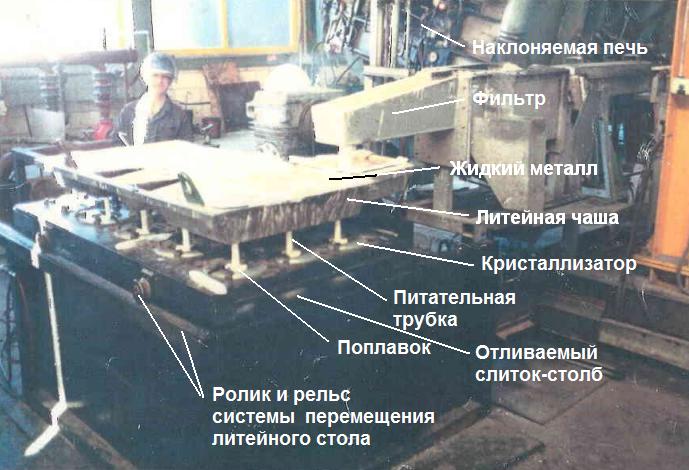 The only advantage of the float casting system is, that the operator sees the molten aluminum at all stages of its movement into the mold. If you have problems with any mold operator overlaps a corresponding feed tube, and casting is continued without this mold.

In semi-continuous casting of aluminum crystallizers require compulsory lubrication. Lubrication of molds float casting systems produce manually before casting. Grease has a thick consistency and a special composition, capable of withstanding the casting conditions. Basically, a lubricant may be sufficient for casting pillars of up to 6 m. However, It remains uniform lubrication problem in the beginning and at the end of the casting, and therefore the single crystallizers Lubricant usually poured poles length 4-5 m.

The figure 2 shows a general view of the system of casting float during casting of aluminum ingots-pillars. 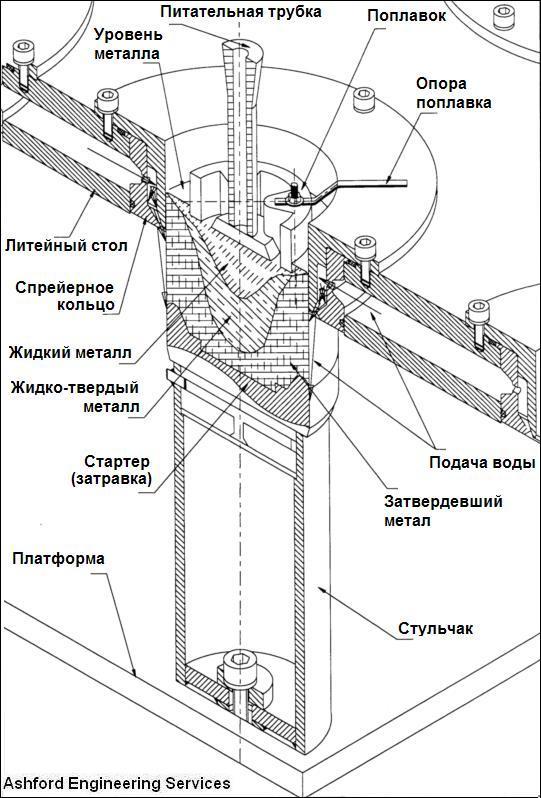 Ingot casting-pillar molding with heat or nadsadkami, as it is often called, by casting Hot Top, It is now a standard technology. It has a general level of metal in all channels of the casting table, instead of different metal layers in each mold, as applied in the float system. 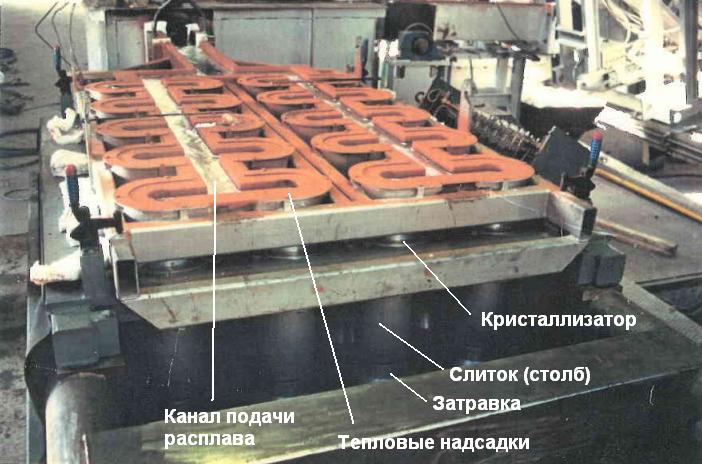 The level of metal at the inlet of the crystallizer is located below the general level of metal in the casting table system channels. Log into the mold as much as possible “warmed” insulation glass. Hence the term “closed top”, Hot Top и “thermal nadsadka”. 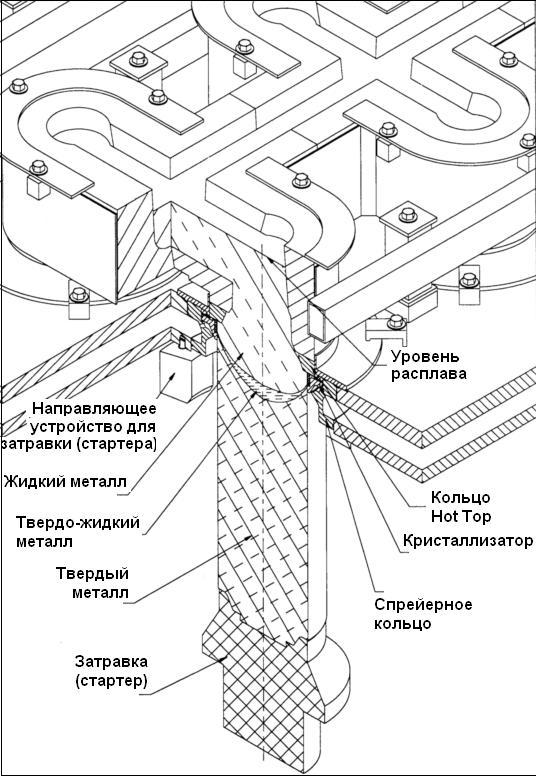 For lubrication of molds commonly used continuous feed lubrication system via the porous graphite ring, which is mounted in each mold.

The advantage of casting system Hot Top is, what it provides:

Both casting system - Float and Hot Top - are aluminum molds, molten metal which define a predetermined shape. Cooling water is supplied to the inner passage of the mold, to maintain a low temperature wall, which is in contact with liquid aluminum. Due to this, the primary cooling of the mold wall is formed near the initial solidified, pretty thin, ingot shell.

The cooling water then flows through the mold slot directly (directly) onto the newly formed surface of the ingot and further solidifies the ingot.. Therefore, this method is called casting casting with direct cooling. This intensive water supply to exiting the ingot mold allows so-called secondary cooling stage and then goes down along the ingot in a casting pit.

Pole casting cycle: from start to excavation from the well

Briefly and schematically, the process of casting the pillars is as follows:

Currently casting systems such as Hot Top, especially on large casters, most commonly used continuous lubrication of molds, which serve a mixture of oil with gas or a mixture of gases: air, argon, nitrogen. This makes it possible to obtain aluminum-pillars bars with a smooth uniform surface, then that is beneficial to the quality of extruded aluminum profiles.