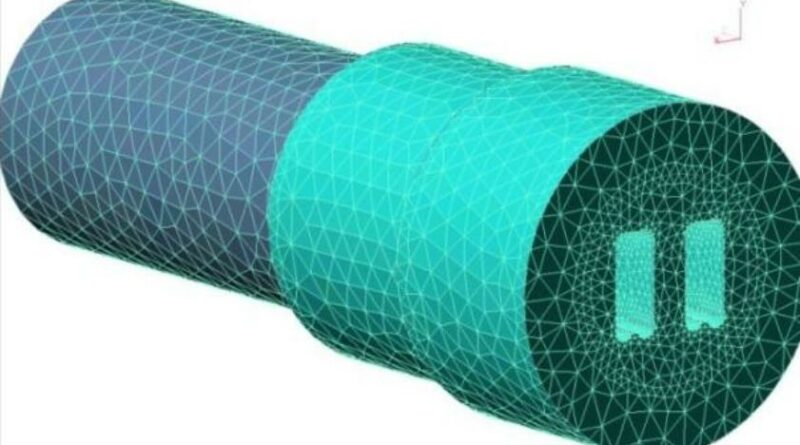 For the average user this model, it often remains “black box”, whose internal structure is unknown or unclear. Below we will try to explain some of the properties of these models, and also to show their potential usefulness for practice production of aluminum extruded products.

Almost all computer models are based on the finite element method (FEM). The Finite Element Method - is a numerical method for solving problems in various branches of physics and engineering, such as, mechanics of materials, Heat Transfer, for liquids and the electromagnetic field. The analytical solution of these problems require complex solutions of partial differential equations, which is possible only in the simplest cases. The formulation of the same tasks in the finite element method reduces to the solution of large systems of algebraic equations, which modern computers can easily cope with [1].

To solve the problem of modeling the object is divided into small elements of simple shape – finite elements. For two-dimensional problems, such simplest elements are triangles (figure 1) and quadrangles, for three-dimensional - tetrahedra and parallelepipeds. Finite elements interconnected, but only at the connection points – sites. Using mathematical relationships, which define the relationship between stresses and strains (in the simplest case – Hooke's law), simulate the behavior of each of the finite elements during loading or moving its components. 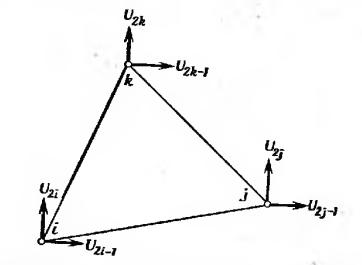 Then all of these finite elements are combined into larger systems of algebraic equations, which already model the entire object as a whole (figure 2). These systems of equations and solves computer. 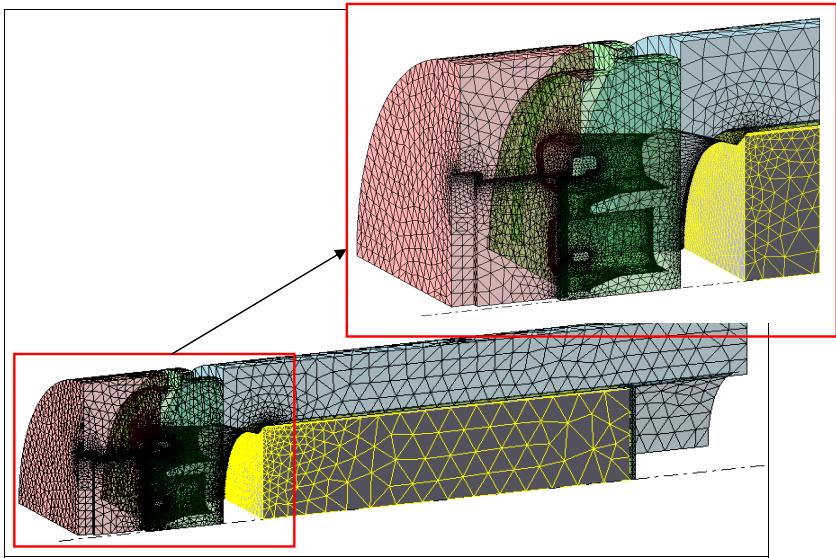 Figure 2 - Three-dimensional finite element mesh
for simulation of the aluminum extrusion
in the computer program QForm [2].

The flow of material through the container and die most strongly depends on:

Therefore, most often the behavior of aluminum is represented by models of a rigid-viscous-plastic material [2-4]. Typically, these models do not take into account the elastic deformation of the material, that in general it is justified, as in the process flow of aluminum through the container and the elastic deformation of the matrix is ​​negligibly small fraction of the total deformation. However, in the channel operating belts elastic behavior of the material can play an important role and have a significant impact on the simulation results. Therefore, to more accurately simulate aluminum velocity at the exit of the matrix is ​​often used visco-elastic-plastic material model.

Strain hardening of the material is usually neglected, so says, in the temperature range of aluminum extrusion is compensated by dynamic recrystallization.

In the end, model links the stress in the material and its rate of deformation of certain mathematical relations, parameters which are specific for each aluminum alloy.

An important condition for adequate modeling is also a model of friction between the aluminum and pressing tool, which reflects the true interaction with the aluminum walls of the container and the elements of matrix, including, with its running web.

aluminum matrix during and deflections

It is known, that the elastic deflection elements of the matrix can have a significant impact on the course material. In turn, These deformations of the matrix depend on the pressure, which renders it passing therethrough material. Therefore modern simulation methods are based on an integrated approach, which combines in one model based on the finite element method (FEM):

calculation procedure involves several iterations, in which there is an automatic realignment calculated finite element mesh.

This approach provides the most accurate results for:

Optimization of the properties of aluminum profile

With the help of modern computer simulation of aluminum extrusion is already at the stage of designing the matrix measures are taken – design and technological – to improve the quality of the profile according to the following indicators [2, 3]:

The size and shape of the profile

Simulation shows a possible distortion of the shape of the profile and possible deviations thickness of its walls and shelves at the output of matrix. These phenomena can largely be exacerbated by the elastic deformation of the elements of the matrix. Examples of such troughs are troughs so-called "tongue" in the planar array, as a result of which there is a significant change in the angle of inclination of the planes of the working belts relative to the pressing axis (figure 3). 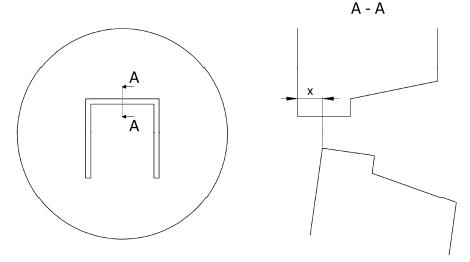 Figure 3 - Deflection of the tongue in a flat matrix [4]

Joint modeling as the metal flows through a die, and deformation of the matrix itself under the influence of this trend, to compensate for the elastic deformation of the matrix and to achieve compression profile size and shape, which is securely located within the tolerance. This is achieved, for example, due to the correct choice of the type of matrix and optimization of its design [3].

There are two types of welds on extruded aluminum profiles (picture 4):

Longitudinal seams occur only in the profiles, are compressed on a matrix of type "porthol", and transverse seams - on all profiles (figure 4).

The longitudinal welds formed, when a hot aluminum alloy is separated in matrix ports into separate streams porthol, which are then metallurgically welded just before leaving the die (Figure 5). 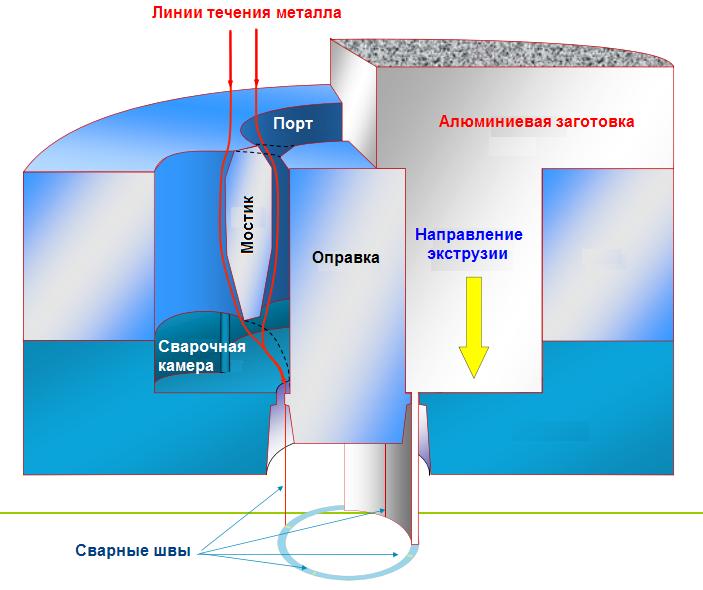 Figure 5 - Formation of longitudinal welds in the matrix-porthole [6]

Transverse welds occur, when the leading end of a new workpiece comes into contact with the remaining in the metal matrix from the previous workpiece and metallurgically welded to them under high pressure and high temperature. Depending on the size and shape of the cross-sectional profile and the design matrix transverse the seam can have a considerable length, which may be about one meter or more.

These welds, as longitudinal, and transverse, can significantly spoil the appearance of facial surfaces anodized profiles, since they often differ significantly from the rest of the surface in terms of gloss or haze (picture 6). This is due to the different sensitivity of the grains of the material to alkaline pickling, which is made before anodizing operation. 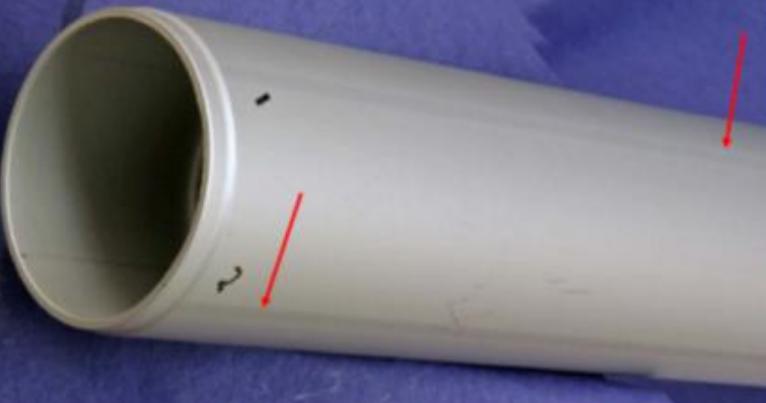 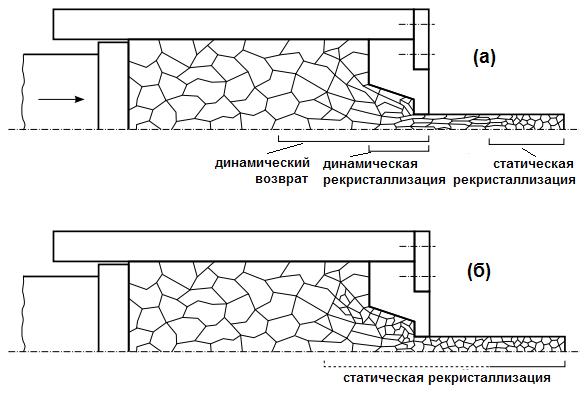 Figure 7 - Processes of recovery and recrystallization in the extrusion of aluminum alloys:
a) in a stationary pressing mode; b) when the press stops to change the workpiece [7] 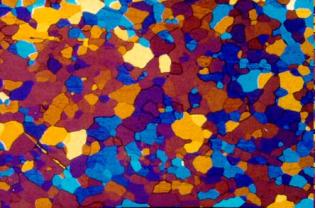 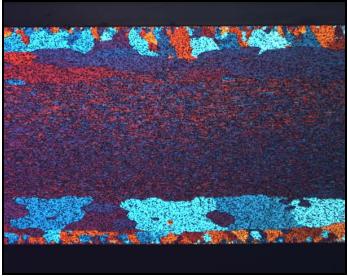 Coarse recrystallized grains are almost always located on the surface of aluminum profiles or near its. Sometimes they appear on only a portion of the surface profile. This layer of coarse grains on the surface of the aluminum profile may cause problems, such as marriage increased when machining or bending profiles, defects in appearance “Orange peel”, stripes and inhomogeneity of the gloss of the anodized surface [8].

The following factors influence the rate and completeness of recrystallization [8]:

The computer model makes it possible to perform optimization as a design matrix, and pressing technological parameters to minimize the possibility of brute recrystallized microstructure profiles.

Hardening in the press is sufficiently rapid cooling of the profile immediately after the release from the matrix to a temperature of about 250 ºС (figure . 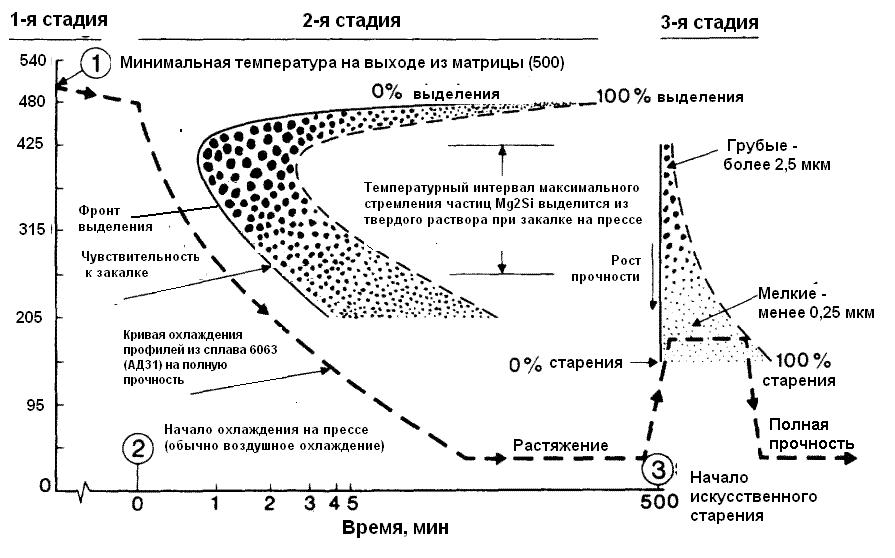 At the same time, the choice of cooling parameters during quenching Profile necessarily take into account the profile of resistance to warping and distortion of the shape. Compare drawings 11 and 12 shows, that in practice the cooling parameters in the hardening are a compromise between achieving high strength profile and minimizing its buckling under the shear and longitudinal profile shape tolerances. 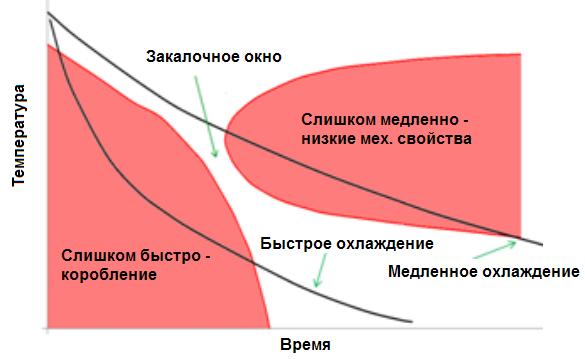 Modern computer model aluminum extrusion are effective tools for improving the quality of extruded sections. They give a deeper understanding of the processes, which occur within the die during pressing of a profile. This saves time and money in both the design and implementation of new matrices, and in solving problems in the operation of existing matrices.

alloy 7075, for example, these features are as follows: