The main parameters of the sulfate anodizing of aluminum and aluminum alloys are:

How do these parameters affect:

How does the chemical composition of aluminum and aluminum alloys affect the quality of anodizing?

How does the anodic coating

Any anodic oxide coating (hereinafter referred to as anodic coating) consists of two layers – a relatively thick porous layer and a thin dense layer, which is called barrier (figure 1). The thickness of the barrier layer depends on the electrolyte composition and processing parameters. By anodizing the first barrier layer is formed, and its thickness is directly dependent on the magnitude of the anodizing voltage.

After the barrier layer is formed, on its outer side, if the electrolyte has sufficient solubility, It begins to form a porous crystalline structure. The mechanism of pore growth is still a matter of debate, However, according to most scientists, its formation occurs due to the following causal chain: local dissolution of the barrier layer – increasing the magnitude of the current – temperature increase – increasing the dissolution rate. This interaction effects and leads to the formation of pores.

For getting Color anodizing mainly two methods are used (Figure 2):

Much less likely to use a so-called integral staining, is provided by a special alloyed aluminum alloys. Staining occurs due to deposition of particles in the volume of the porous layer, but not in the beginning.

Moreover, so-called interference staining is used in limited quantities: a variant of electrolytic staining, which requires an additional bath for expansion since the vicinity of the bottom. 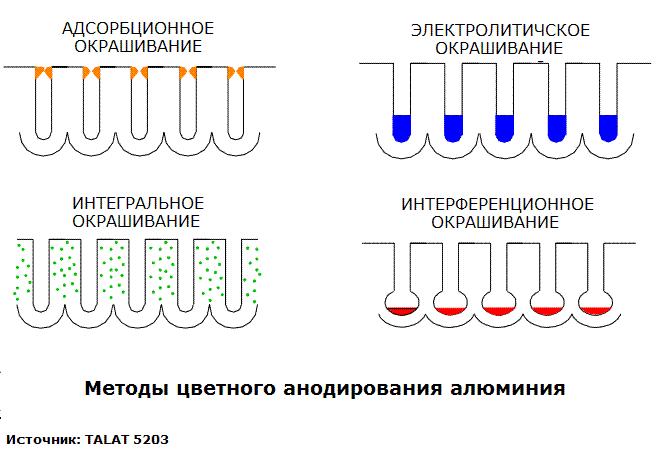 In the course of its growth anode cell, comprising pores themselves and the surrounding alumina, form a hexagonal structure, which, apparently, implements the principle of minimum energy. Hexagonal shape anode cells does not depend on the type of electrolyte. This clearly indicates that, This form is purely energetic origin.

Anodizing the aluminum sulphate and aluminum alloys is the most common. Sometimes it is called the standard.

The rate of growth has

On most aluminum alloys, this electrolyte provides a colorless transparent anodic coating. When sulfuric acid anodizing pore growth rate is constant at constant current density. At a current density 1,3 A / EP2 this velocity is of the 0,4 m / min. Since the thickness of the barrier layer remains constant, it means, that at the same speed and dissolves the bottom pores.

The dimensions of the anode compartment

The dimensions of the anode cells directly depend on the anodizing parameters (table 1). With the increase in the size of the anode voltage of the cell increases, and the number of pores decreases accordingly. The relationship between cell size and approximately linear voltage, that is, the higher the voltage, the larger cell sizes.

The thickness of the anodic coating

The thickness of the anodic coating increases with increasing duration of anodization. However, the extent of thickness increase depends on several factors, such as the type of electrolyte, current density, treatment duration, etc.. Initially there is a rapid increase in the actual and constant thickness, and then starts the thickness reduction rate of growth, until such stage, at which the thickness remains approximately constant, despite the continuing supply of electric current. This is due to the fact, that during anodization occurs as a continuous increase of the coating thickness, and its dissolution under the influence of electrolyte (sulfuric acid solution).

In principle, pure aluminum is anodized better, than its alloys. The appearance of the anodic coating and its properties (wear resistance, corrosion resistance, etc.) depend on both the type of aluminum alloy, and its so to speak metallurgical biography. The size, the form and distribution of intermetallic particles also affect the quality of the aluminum alloy anodizing. The chemical composition of the aluminum alloy is very important in some products, which require brilliant anodizing, for which it is necessary, insoluble particles to level as low as possible.

Behavior intermetallic particles during anodization depends on the type of particles and the anode solution. Some intermetallic compounds are oxidized or dissolve faster, than aluminum (for example, β-Al-Mg particles), resulting in the formation of porous structure. Other intermetallic particles, such as silica particles, They are practically insoluble in anodising and therefore fall in the form of inclusions in the thickness of anodic coatings. Intermediate between these two extreme cases are compounds (FeAl3, α-Al-Fe-Si and t.d.), partially dissolve, and partially remain in the coating, which negatively affects the quality of coatings, especially color.

Effect of increasing temperature of the electrolyte is proportional increase in the rate of dissolution of the anode coating, resulting in a more subtle, more porous and softer coating (picture 4).

To obtain the so-called hard anode coatings, a low temperature is used (from 0 to 10 ° C) in combination with high current density (from 2 to 3,6 A / EP2) and very active stirring of the electrolyte. In the decorative and protective anodized aluminum and aluminum alloys typically used electrolyte temperature 15 to 25 oC. If the temperature rises above, the maximum possible thickness of the anode layer is reduced to lower values ​​due to the high dissolving ability electrolyte.

The effect of the current density of anodization

The interval of the current density of standard sulfuric acid anodizing of aluminum is from 1 to 2 A / EP2, in special cases - 3 A / EP2. At a current density below this range, get soft, porous and thin coating. With increasing current density coating is formed relatively quickly at its lower dissolving an electrolyte and respectively with a harder and less porous coating. At very high current density there is a tendency to so-called "burn marks" – the occurrence of excessively high current in local areas with their overheating (figure 5).

When the anode of the coating requires a good and clear reflection of light, the special anodizing conditions apply low current density around 1 A / EP2.

The influence of sulfuric acid concentration