The properties of aluminum and its alloys
admin

There are many reasons, which does not need to be dealing with mercury under any circumstances. Little of, it is toxic and can lead to emotional and mental disorders human, so it can still lead to the destruction of the aluminum structure of the aircraft and a plane crash! How can this be?

Aluminum is used everywhere today: from beer cans to airplanes.. The thing is, that aluminum is a good choice among other materials for many situations. It is lightweight, solid and has a coating, compared with that only a diamond can be as hard. Iron - more precisely steel - has great strength and yet not interchangeably, for example, construction. However, if you make it an iron-steel fly on the sea every day, it quickly rust. When the iron rusts, it is combined with oxygen. Thus iron is converted into the lungs, red flakes, which are easy to clean off the surface of iron. Unlike aluminum, iron by reaction with oxygen forms alumina - an incredibly solid, which is very difficult to scratch.

That dramatic difference behavior of iron and aluminum by reaction with oxygen only confirms this idea, that "chemistry - it's magic". Aluminum oxide does not peel off from aluminum, like rust on iron. conversely, a film of aluminum oxide encapsulates the remainder aluminum and further prevents its "rusting". It `s that, that it is necessary for the aluminum structure, that flies in the air and, often, over the seas-oceans.

Mercury and a fresh aluminum

Mercury breaks all this is a great aluminum perfection. Or, at least, can break, if you fall on the aluminum part with a fresh scratch. If this happens, the mercury is actively connected to the aluminum, for pulling him out of the aluminum structure. Of course, when aluminum mercury amalgam and fall on the air, the aluminum then combines with oxygen to form the same superalloy alumina. It's just all there is in the wrong place in the form of growing feathers and pillars, that rise of liquid mercury.

This alumina output from the primary mercury scratches gives the opportunity to break through the aluminum until the entire mercury evaporates into the air. Therefore, even small amounts of mercury can cause great destruction.

Well, not really! What Mercury Really Does, so it penetrates through the protective oxide layer of aluminum, It makes it possible to oxidize aluminum with a very high speed. Mercury enables aluminum surfaces to be in constant contact with the air and provides a continuous process of forming alumina. It looks like this, as if, really, eating mercury aluminum.

Of course, under normal circumstances this does not happen, because aluminum at the exposed surface instantly formed alumina film, which protects the aluminum from further oxidation. Mercury inhibits the formation of an oxide film and gives this eerie picture eating mercury aluminum, which is shown here.

The mechanism of the reaction of aluminum with mercury is very complicated. There is a spontaneous reaction between mercury film, aluminum, moisture and oxygen from the air (figure). While the mercury does not dissolve in aluminum, aluminum is slightly soluble in mercury (0.002 % at room temperature). When mercury wets the aluminum surface, it supports the surface in an activated state, so thereon can not form an oxide layer. Aluminum will dissolve in mercury and oxidize in contact with air [2].

During this reaction no mercury consumption occurs, so once begun, she, basically, will never stop [2]. 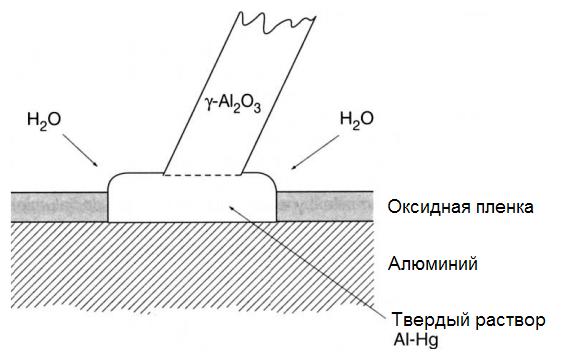 Figure – Effects of mercury on aluminum [2]

Chemical interaction of aluminum and mercury

If no aluminum oxide layer, the mercury forms an amalgam with it - aluminum alloy with mercury. Fresh aluminum amalgam on the surface reacts violently with moisture in the air - reacts very actively, especially on days with high humidity [3]:

As a result of this reaction of aluminum water formed aluminum hydroxide, which grows in the form of feathers. Until, until the end all the aluminum or all of the mercury in the amalgam will not withdraw from the reaction products of.

Like most spontaneous processes, the formation of aluminum hydroxide is an exothermic reaction and the temperature is increased to. The temperature quickly reaches a maximum, and then the reaction may also take several hours.

Mercury on aluminum - the weapon of sabotage

they say, that during World War II saboteurs tried to damage the enemy planes, smearing them mercury. They look more authentic stories about, someone breaks the mercury thermometer on something Aluminum, for example, an aluminum park bench. The next day, they say, you could see huge holes, mercury that eating up to this bench.

Anyway, for example, on American Airlines prohibited to carry more than one household mercury thermometer, and other devices with mercury transported with great care.