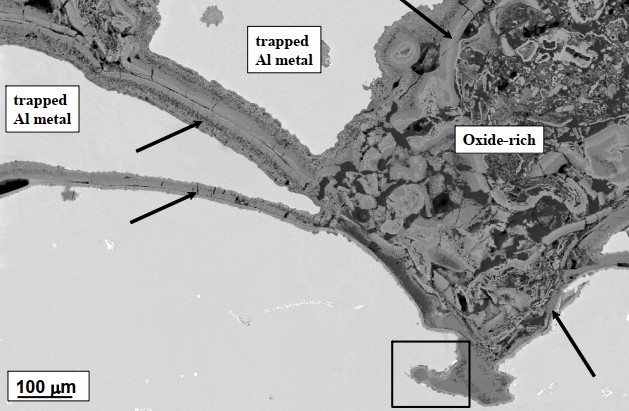 What is aluminum slag

Aluminum slag is a source of problems in all industries, who are engaged in melting aluminum and aluminum alloys. In solid form, the slag is all the more undesirable., as it is a valuable by-product, which greatly depends on the profitability of production operations.

This is because, that the slag, in addition to oxides, often contains a large amount of usable metallic aluminum, which is captured by these oxides (figure 1). If proper measures are not taken to prevent excessive slag formation, as well as maximum extraction of metal aluminum from it, then this can lead to significant losses of potentially usable metal.

The overwhelming proportion of aluminum is melted in gas reflecting furnaces (Figure 2). These furnaces are characterized by the following technological factors, which have a great influence on the technological losses of metal in the furnace.

Figure 2 - Cross section of a reflective melting furnace:
1) transfer of heat to the surface of the melt by radiation;
2) heat transfer deep into the melt by convection [3]

The first factor is the gas / air ratio on gas burners. Excessive air supply leads to an increased rate of slag formation, if a fresh aluminum surface appears as a result of any movement of the melt surface. The situation is getting worse, if the burners "hit" directly on the surface of the melt or on the aluminum charge.

Holding temperature of the melt

Second, and also an important factor, is the holding temperature of the melt after melting. Temperature rise only by 25-55 ºС can have a very large impact (figure 3). 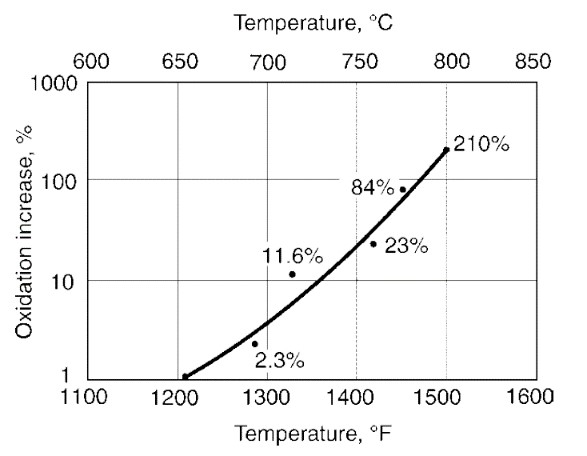 Excessive thickness of the slag layer above the melt can have a thermal insulating effect and cause increased burner operation., to maintain the desired melt temperature. In this case, the temperature in the slag layer rises and, respectively, the rate of metal oxidation increases, which enters the slag from the surface of the melt. As a result, there is a logarithmic increase in the loss of metal during melting.. The effect of increasing the slag thickness on the melting rate is shown in the figure. 4, which is confirmed by most aluminum smelters.

Loading of lightweight scrap directly into the melt of reverberatory furnaces of the bath type can be a source of an additional increased increase in melting losses of metal.. It happens, if slag, which formed on the surface of the melt, then exposed directly to the flame of the burners. This slag is a "liquid" mixture of oxides and metal entrained in the slag.. It can contain up to 80 or even 90 % good metal. If this slag is not quickly removed from the surface or treated with a flux to separate the metal from oxides and contaminants, then this metal, will quickly oxidize and this will lead to additional loss of usable metal.

To reduce the formation of slag on the surface of the melt, it is important not only to carefully control the operations of loading the charge and control the temperature., but also creating conditions for better heat transfer to the melt. With a decrease in the surface temperature of the melt, the temperature difference between the heat source and the melt increases, which provides a higher rate of heat transfer and, Consequently, faster melting. This is facilitated by: 1) the correct gas / air ratio on the burners and 2) stirring the melt. This makes it possible for the heat from the radiant energy of the vault and walls to more efficiently get to the surface of the melt and spread into its depth..

Dry hearth furnaces are free of some of these problems., since surface oxides from the charge remain on the inclined hearth, and the molten aluminum flows into the furnace. If wet or oiled aluminum scrap is loaded onto an inclined bed, then it doesn't create those problems, which arise when it is directly loaded into the melt. However, oxides build up quickly on the inclined hearth, which can impede the flow of molten aluminum. Therefore, these oxide accumulations need to be cleaned off regularly..

Slag removal should be done if necessary., usually once per shift, if so-called "wet slag" is not formed [contains 60-80 % aluminum].

Recommended practice for the removal of "wet" slag from the melt [1]:

When slag forms on the surface of the melt, then it must be removed, to:

methods, which are used in industry, usually a combination of slag treatment in a furnace or a charging shaft, as well as regular cleaning of the walls and bottom of the ovens.

For this, several types of solid fluxes (powder or granular) are usually used., which are mixtures of chemical compounds, having different functions. These mixtures may include reactive (reactive) components, as well as fillers, which provide a convenient volume or cost reduction.

It is known, that a large percentage of usable metal may be lost, when the "wet" slag is discharged from the furnace [containing metal 60-80 %]. Many industries are trying to reduce the metal content in such slag by treating the slag in a furnace using exothermic fluxes.. These fluxes contain oxidants and fluorides, to raise the temperature and help separate the oxides from the metal. This exothermic reaction consumes aluminum to generate heat and can cause up to 20 % metal, which is contained in the slag.

Special slag fluxes are designed for, to help separate metal aluminum, which is trapped in the slag. This slag consists of droplets of metallic aluminum., which is located inside the shell made of aluminum oxide (figure 5). 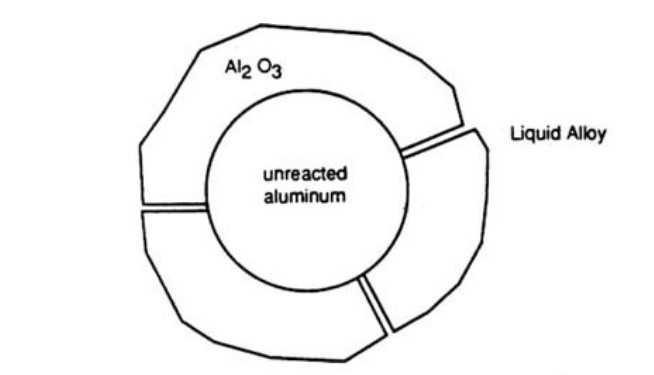 The composition and structure of the slag depends on the type of aluminum charge and the type of melting furnace.. The fluxes used are usually reactive, which provides good contact with the slag to separate it from the aluminum. Flux can also contain exothermic components, so that the generated heat accelerates the separation process. The use of thermal and mechanical stirring results in an increase in local surface temperature and fluidity., which helps to soften the oxide shell, release of aluminum metal droplets, their coalescence and return to the melt.

Application methods for both types of flux can vary greatly from production to production., but they all require tight mixing of the flux and slag, to achieve good separation of aluminum from oxides [1].

A typical such operation is shown in the figure. 6. 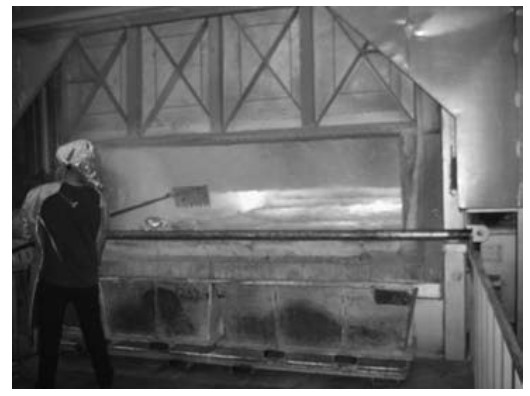 Not chemistry, but physics

Gotta understand, that during the fluxing of the slag, there is no reduction of aluminum from oxide. This can only be done electrolytically.. As a result of the treatment of the slag with a flux, a purely physical separation or fracture of the fragile oxide layer occurs and the release of aluminum, which was contained inside it (figure 7). 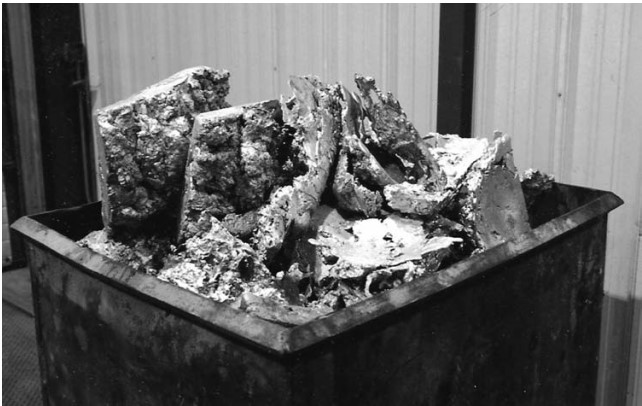 Typically, the aluminum content in the untreated slag ranges from 85 to 90 %. Furnace fluxing can return about half of this amount., if you act actively and energetically.

The flux treated and skimmed slag is still suitable for additional processing on auxiliary equipment, for example, on a special crushing press. After this treatment, the amount of remaining aluminum in the slag can be about 25 % (drawing 10).

It should be noted, that all these numerical indicators can only be achieved by a very laborious, careful and accurate work. The share of reduced aluminum may decrease by 50 % and more, if the operation of processing and removal of slag is carried out unprofessionally. 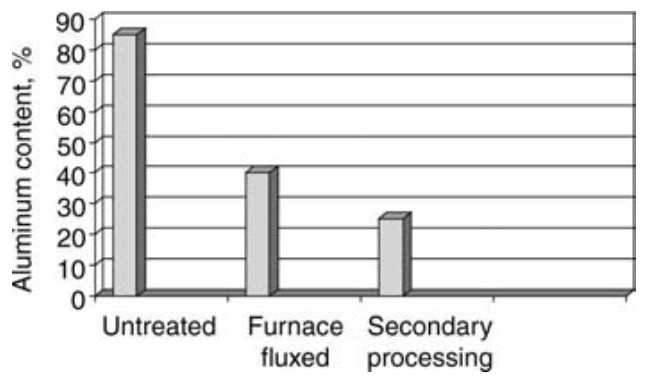 The practice of handling aluminum slag varies greatly from production to production.. Some industries perform fluxing and refining operations very carefully.. Others simply skim the slag into containers and send it to local slag recyclers.. These slags account for a large proportion of metal losses, that occur in the metallurgical smelting industry. These losses can amount to 1-2 % from the weight of a clean and dry aluminum mixture, but can go up to 6-10 % and even higher for contaminated aluminum scrap.

How to reduce the amount of slag

To reduce the amount of slag, which is formed in smelting production operations, it is recommended to adhere to, as far as the type and design of the furnace allow, following rules [1].