The first aluminum bridge deck was installed in the city of Pittsburgh (USA) in 1933 year.

However, the first all-aluminum bridge was built near Massena city in the US state of New York 1946 year. This railroad bridge was originally built as a twin-track steel bridge. V 1946 year long span 30,5 m was replaced by a riveted plate-girder structure of the aluminum alloy 2014. It should be noted, that the railway was not a trunk, and served as a local plant for the smelting of aluminum. 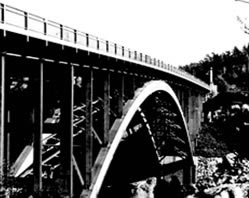 In the Netherlands, the first aluminum bridge was built in Amsterdam in 1955 year and another one near Anna Paulowna in 1961 year. Moreover, two bridges old flooring was replaced with aluminum, one in Amsterdam 1958 year and one in Rotterdam 1985 year.

1995 - the year of the revival of aluminum bridges

History shows aluminum bridges, that worldwide only a few aluminum bridges were built between 1970 and 1995 years. However, beginning with 1995 in the United States, as well as in Europe and Japan, New initiatives have been taken to develop and promote the construction of aluminum bridges. In Europe, in particular, in Norway and Sweden, It was found near 80 aluminum bridge decks, which replaced the old wooden or concrete floorings.

causes, which caused increased interest in aluminum bridges, They are as follows.

3) Possibility of supplying extruded aluminum profiles with a wide variety of cross-sections, usually up to 600 mm and a width of 400 mm.

4) Significant growth in the understanding of aluminum as a material of construction, which occurred over the past decade.

Figure 2 - Aluminum bridge near the city of Lyon (France)

In Europe, the design of aluminum bridges based on the following regulations – Eurocodes:

1) Low modulus of elasticity of aluminum:

3) Risk of galvanic corrosion due to direct contact between aluminum and steel.