Aluminum in shipbuilding Most Viewed
admin

Aluminum alloys have long been used shipbuilding. The first attempts to build aluminum yachts and military boats were back in the late 19 th century. Their advantages in weight reduction was apparent, but, However, due to problems with corrosion widely used aluminum Shipbuilding has been postponed until better times. Already in the 1930s were designed aluminum alloys, who successfully resists corrosion, but during the Second World War, all the aluminum was for the construction of military aircraft, and its application in the development of shipbuilding stalled.

Currently manufactured from aluminum alloys ship hulls, superstructure and various marine equipment. Compared to steel, aluminum alloys give a mass reduction of ships 50-60%. This increases the capacity of the vessel or improve its technical characteristics, for example, agility and speed.

It is interesting to trace the history of the use of aluminum in small boats - boats, boats and yachts – in the USSR. Especially, that not a few of them continue to work so far. Often, all aluminum boat called – and rightly so – metal boats.

In the mid-70s, Soviet industry delivered annually to the commercial network more 100 thousands of aluminum – metal – boats. Most of these boats were almost the same type of quadruple “dyuralky”. They were very popular, though, as it is now clear, had significant shortcomings, such, as a small strength of the hull, lack of seaworthiness and, remark, tendency to corrosion.

On the other hand, already in the Soviet shipbuilding, mainly for small vessels, widely used aluminum-magnesium alloys, mainly, Alloy AMg5 and sometimes AMg6. for instance, for cladding buildings fishing barges used alloy AMg5. here, must be understood, It occurred application magnaly-alloys for manufacturing aluminum boats and for consumer. During the construction of these boats are used in arc welding argon.

What is a "duralumin"

The main alloying element duralumin alloy - duralumin - copper content is generally from 3 to 6 %. It is associated with copper low corrosion resistance duralumin. Magnesium also serve as the main alloying element content of up to 2 %. High strength alloys achieved through dispersion strengthening by precipitation of secondary phases during aging the quenched alloy. Alloys of this series have a very good fatigue performance. therefore, for example, Duralumin alloy D16 used for the cladding of aircraft wings.

A feature of duralumin alloys is their limited weldability. This limitation is due, At first, these alloys with a tendency to the formation of hot cracks during welding, and loss of strength in the welding heat-affected zone.

Therefore, to connect the various elements and components of boats Dural rivets always apply. These rivets and aluminum, generally of a similar alloy, but, perhaps, with a reduced content of silicon, iron and manganese. note, that selecting rivet material is very important to prevent galvanic corrosion of themselves and the material, which they connect.

A truly "duralumin" is only the aluminum alloy of the alloy D1 type GOST 4784. So it is still called its inventor - a German engineer, metallurgist, Alfred Wilm in the early 20th century. Another name for this alloy - duralumin. More durable alloy D16 formerly called superdyuralyuminom. Often, all this series aluminum alloys Al-Cu-Mg called duralumin, duralumin or duralumin. However, these names are not standardized and are not applied in the normative documents, for example, GOST standards.

At present aluminum alloy D1, known abroad, as an alloy 2017, finds very limited use, primarily, in the form of rivets. Alloy D16 - alloy 2024 - it continues to be widely used in aircraft, most often in the form of clad sheet, i.e. sheets coated with commercially pure aluminum to a thickness of 10 % sheet thickness.

Probably, the most famous of this "duralumin" boat is a boat "Kazanka", which has undergone several modifications, until "Kazanka-6M". 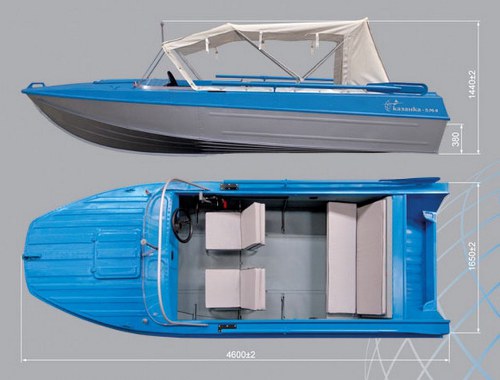 In the manufacture of the housing "Kazanki" used sheets of aluminum alloy thick D16AT 1,5-2,0 mm.

The letter T represents, that alloy sheets D16 supplied in the T, that is hardened and artificially aged.

Aluminum alloy D16 refers to the group of alloys, that semi-officially called "duralumin" or "duralumin". The official standards, for example, GOST 4784-97 deformable aluminum alloys or GOST 21631-76 on aluminum sheets, such terms are not applicable.

Motor boats "Sarepta", "Crimea", «Bus», "Amber", "Neman" and some others were made of aluminum-magnesium alloys. These were mainly thick sheets 1,5-2,0 mm AMg5 alloy and alloy sometimes AMg6.

Distinctive features of these alloys consist in, what they:

Therefore aluminum boats of these alloys are typically welded using argon-arc welding. Rivets can also be used in those places, wherein application of welding difficult or even for the entire structure.

Authoritative opinion of the aluminum used in boat, boats and yachts gives the industry standard of the American Society of Boat and Yacht Manufacturers (American Boat & Yacht Council). This standard gives recommendations for the use of aluminum in construction: 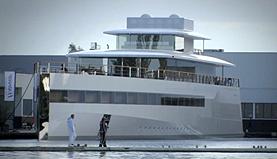 This is usually small boats, body which is manufactured using aluminum rivets. For the boat hull, which is used in the manufacture of sheet metal parts forming stretch sheets is used from an aluminum alloy 6061 T4 condition.

If the plastic deformation of the sheet tension is not provided, the housing is used for aluminum-magnesium alloys 5050, 5052 and 5086 in a variety of cold-worked condition, and Alloy 6061 in T4 and T6 conditions.

For the boat hull, which is used in the manufacture of sheet molding parts with stretching, apply sheets of aluminum alloy 5086 in the annealed condition and alloy 6061 able to T4.

If the plastic deformation of the sheet tension is not provided, the following may be used aluminum alloys for body 5052 and 5086 cold-worked in various conditions and Alloy 6061 able to T6

the same alloys used for the manufacture of the transom and deck, and that the housing.

For welded constructions of boats and yachts - housing, trance, deck and most of the other components used almost exclusively aluminum alloy 5086 in the cold-worked condition N116 and N117. For internal frame structure body is used an alloy 6061 able to T6.