The cylinder block is a part of an internal combustion engine, which is disposed between the cylinder head and the crankcase. It is the support structure for the whole engine. All parts of the motor are mounted on the engine block or in itself, and it ensures their alignment.

Not so long ago in most car engines, except sport, used monolithic cast iron cylinder blocks.

From iron to aluminum cylinder block

The strength at elevated temperatures

Requires preserve the desired strength at temperatures up to 200 °C. The greatest stresses occur in the field bolting the cylinder head. The material should withstand the load from the crank shaft rotation and thermal expansion of the cylinder.

The strength and hardness at room temperature of

aluminum alloy material at room temperature, must have sufficient strength and hardness, to provide him a good stock removal and high build quality.

When the engine cylinder block is subjected to a cyclic tensile stress in a wide temperature range. This interval begins with negative temperatures in winter and ends elevated temperatures of about 150-200 oC. Therefore, the most important characteristic of the material cylinder is fatigue strength.

It is known, that the properties of the material any metal casting - iron and, and aluminum - not only depend on the chemical composition of the material and its heat treatment, but also on the method of casting, as well as on the casting space, from which a test sample.

Selecting an aluminum alloy casting for cylinder block requires consideration of various factors. Aluminum casting alloy, which are used in the production of complex castings such as cylinder blocks, must comply with a whole combination of technical requirements. These requirements include:

Level determines the strength of the alloy, for example, the minimum allowable wall thickness. Therefore the choice of the aluminum casting alloy must be carried out at the first stage of designing the engine block. Usually, aluminum alloy selection is a compromise. High strength casting alloys could be the preferred choice, but often they can have such shortcomings, the high cost, low castability and insufficient strength at elevated temperatures.

For reasons of price and technical reasons, almost all automotive aluminum engine blocks made of alloys, It is based on the use of recycled aluminum - aluminum alloys, which is obtained from aluminum scrap. it, for example, alloys EN AC-46200 (AlSi8Cu3) and EN AC-45000 (AlSi6Cu4). At higher requirements for the viscosity of the material used alloys with more stringent requirements on the impurities and contaminants, which are close to the requirements for alloys of primary aluminum.

Castability of aluminum alloys usually increase with increasing content of silicon. On the other hand, additives copper, are necessary to improve the high temperature strength, have a negative effect on the castability of aluminum alloys, first of all, fluidity of the alloy during filling of the mold. Moreover, when applied molding under high pressure, the alloys used with some iron, and Mn, to prevent sticking of molten aluminum to a steel mold. However, increased iron content lowers the strength properties of the aluminum casting.

Sometimes the most important when choosing a cast alloy is not the price, and casting properties, and some of its other properties, for example, wear resistance.

The chemical composition and heat treatment

Casting aluminum alloys, which are used for the manufacture of car engine blocks, usually include alloys 46200 and 45000 of European Standard EN 1706 (bulky prefix “EN AC-“ omitted). Chemical "formula", respectively, of these alloys has the form AlSi8Cu3 and AlSi6Cu4. Their American counterparts - better known - are A380.2 and A319 alloys. These hypoeutectic aluminum-silicon alloys generally produced from recycled aluminum. Of them cast automotive cylinder blocks different methods gravity casting. 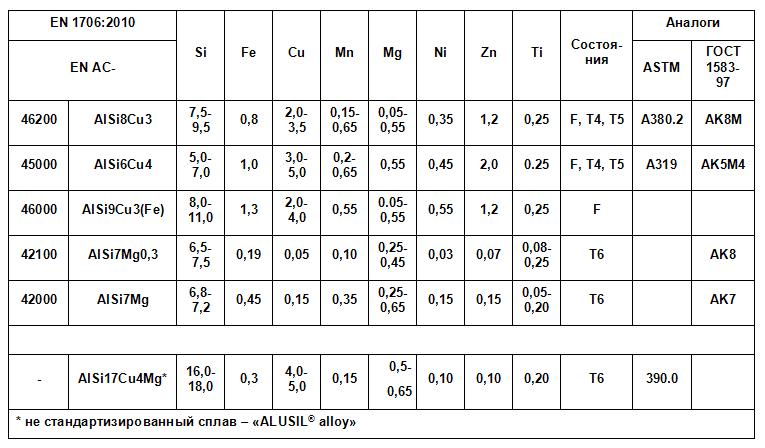 The relatively high copper content allows these alloys to retain their strength at elevated temperatures and, Moreover, It provides them with a good machinability. Typically, these alloys - 46200 and 45000 (A380.2 and A319) - F states apply (cast state), T4 (hardening and natural aging) and T5 (incomplete hardening and artificial aging). For castings of these alloys can also be applied state T6, but for many products from these alloys sufficiently stabilizing state T5.

Almost all of the cylinder blocks, which is cast by high pressure die casting, made of alloy 46000 (AlSi9Cu3 (Fe)). Typically this alloy requires no heat treatment, except for a moderate release to reduce residual stresses.

Cylinder blocks made of aluminum alloy 42100 (AlSi7Mg0.3) and 42000 (AlSi7Mg) get high strength and elongation at room temperature, when subjected to heat treatment at a state T6. In this case, you must carefully control the residual stresses, which occur during quenching the casting to achieve the T6 condition. Higher crack resistance of these alloys allow them to withstand thermal fatigue stresses. This is due to a certain worsening of machinability and increasing cost due to the additional heat treatment of the costs of the state T6 or T7. The requirement for reduced levels of impurities, such as iron, manganese, copper and nickel, also requires additional costs in comparison with secondary alloys, mentioned above.

Aluminum casting alloy, which are usually used for the manufacture of cylinder blocks, solid and durable enough, to work directly in the sliding pair with piston engines. For this purpose, suitable only hypereutectoid classes of aluminum alloys such AlSi17CuMg.