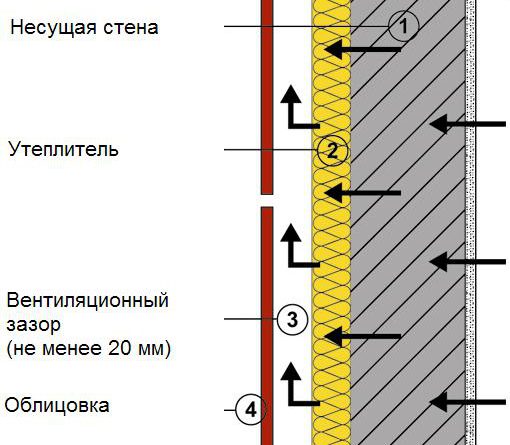 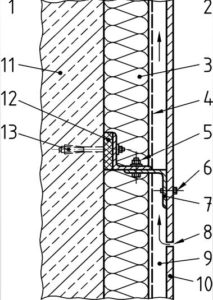 The essence of a ventilated facade

The essence of a ventilated facade is, that the insulation and vapor-permeable barrier, one side, and an outer cladding, on the other hand, structurally separated ventilated gap. This ventilation cavity between the façade components regulates the humidity inside the building: all moisture is reliably removed through the ventilated gap. Wet the outside of the bearing wall dries very quickly. All this ensures an optimum climate inside the building.

Figure 2 - The principle of the ventilated facade

Materials for the substructure of ventilated facades

The international authority for ventilated facades - DIN 18516-1 establishes requirements for the materials of ventilated facades, which can be used without special confirmation of their corrosion resistance, including, for:

For the manufacture of substructures, in particular, recommended:

The use of other materials of substructures, for example, wood, It requires special acknowledgment and resolution.

Aluminum substructure of a ventilated facade

The aluminum substructure ventilated facades is made up of aluminum profiles and anchors, as well as various fasteners (screws, screws, rivets), which form a frame for mounting cladding panels on the outer or inner wall of new or existing buildings.

All aluminum components subsystems are made of aluminum alloy 6063-T66. Note, the minimum strength of an alloy of aluminum profiles 6063 T66 is able to 245 MPa. T66 indicates the state, such that to achieve high strength in the production profiles were taken special measures. These measures may, for example, It consists in the tight control of the initial billet temperature, temperature profile at the outlet from the die and the rapid cooling profile on the press.

Protection against corrosion of aluminum substructure

No special measures to protect the surface of the aluminum components provided by the substructure. At the same time, in conditions of high humidity reacting the unprotected aluminum with the cement-based materials leads to its severe corrosion. Therefore aluminum brackets when installed on concrete and brick wall must necessarily have a backing of polypropylene or polyvinyl chloride.

Ancillary components of the aluminum subsystem include:

Load from the subsystem to the supporting wall

Aluminum subsystem Hilti EuroFox used in the construction of ventilated facades as the supporting structure for facing external or internal walls of new and existing buildings. It is designed for the efficient transmission of the wind load and the weight of the lining to the carrier, concrete or brick, walls.

Limit the wind load on the wall with mounted ventilated facade must be calculated in accordance with national standards. In Great Britain, for example, limiting wind load computed according to Eurocode 9 (IN 1991-1-4), but the final appointment of marginal wind load multiplying factor used 1,5.

The number of brackets, whereby aluminum subsystem is attached to the supporting wall, It should depend on the weight of the selected type of lining and determined at the stage of designing a ventilated facade. Details of brackets and their strength design shown in Figure 4. The design load at the fixing between the various components of aluminum subsystem should be lower, than their calculated strength. 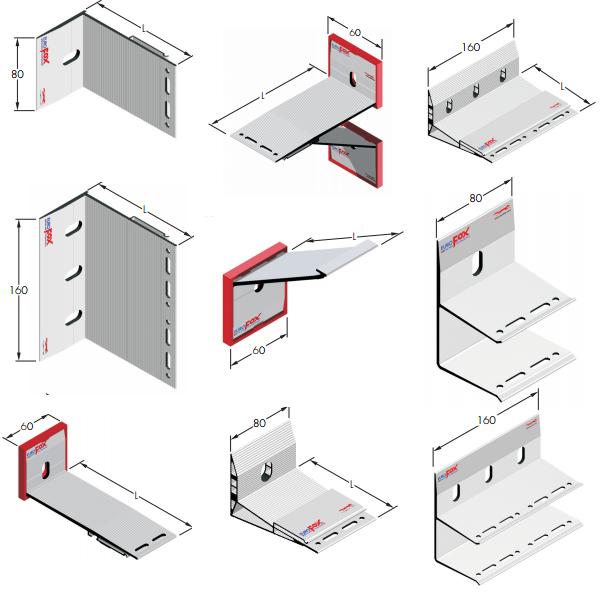 The design of the guide profiles and a method of attaching them to the brackets shall meet the requirements of national building codes, subject to the minimum the mechanical properties of aluminum alloys used in their predetermined state, for example, 6063-T66 or 6060-T66. The maximum deflection of guides (aluminum profiles) between two supports should be more than one two hundredth of the span length (L / 200), and for cantilever elements - one hundred and fiftieth of their length (L / 150).

Usually, aluminum profiles subsystem is fixedly secured in the middle of their length with the use of conventional circular holes. At this point the remaining fastening profiles operate sliding on the elongated holes, which allows the profiles to lengthen or shorten with temperature changes (see. Figure 4).

To ensure the free thermal expansion is necessary to ensure the long gap 2,5 mm per meter of length. For standard guide length 3 m bandgap 8 mm between adjacent rails is considered sufficient. When calculating the thermal expansion coefficient of aluminum generally take 23h10-6 1/TO. It means, what, for example, temperature difference in 100 degrees Kelvin (or Celsius) each meter of the aluminum profile will change its length by 2,3 mm.

Fire resistance of an aluminum subsystem

aluminum brackets, guides and fastening them together are non-combustible. Therefore we can assume, that the British construction standards they have class 0 or "low risk".

Aluminum brackets subsystems include pads made of polyurethane or PVC for, to reduce the risk of "cold bridges" through the contact bracket-wall. As these brackets largely "hidden" behind the facing panels and, Moreover, present in relatively small amounts, they are unlikely to have a significant impact on the overall fire facade cladding.

At the same time, for each system with ventilated facade necessarily draw conclusions about its fire is based on tests, which conducts special accredited laboratory.

The minimum width of the ventilation gap between the back wall of the cladding panels and the insulation or wall (in the absence of insulation) depends on the height of the building and the climatic features of the area, in which the facade is set. Hilti Eurofox system has a ventilation gap of at least 38 mm for facing panels with plugged or labyrinth joints and 50 mm - for open joints.

Aluminum substructure itself does not require any maintenance. At the same time, the whole system of ventilated facades must be inspected annually, To make sure, that the internal elements of the facade are in order and well ventilated, and cladding panels are in place and properly secured.

The service life of the aluminum substructure

Aluminum subsystem Hilti Eurofox in normal climatic conditions, the UK is designed to limit the service life of not less than 35 years.

Note, that the normal conditions in the various regions of the UK are significantly different from each other, for example, by annual precipitation (figure 7). 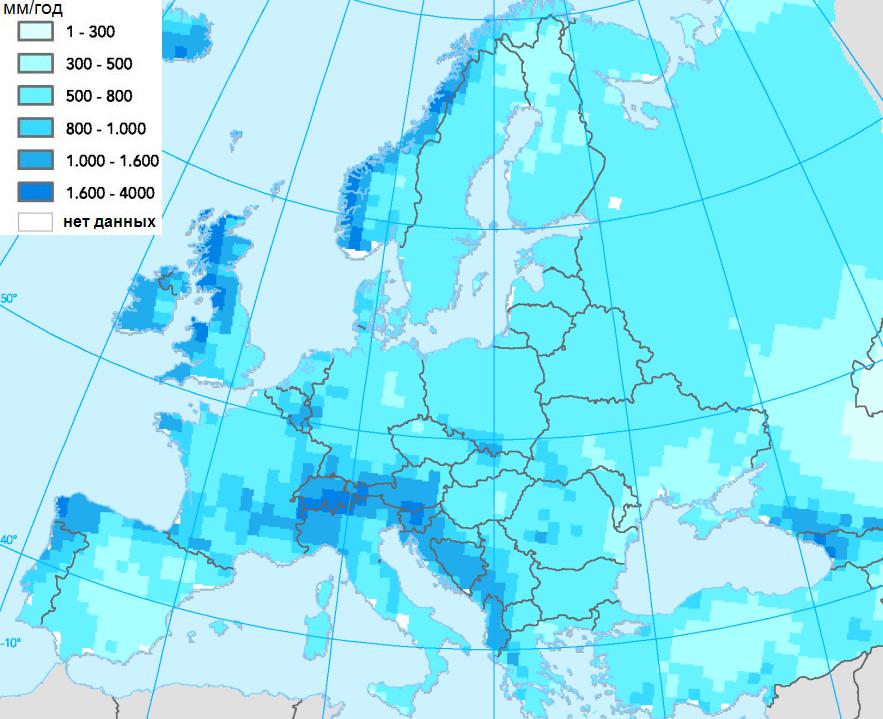 Figure 7 - The annual rainfall in Europe and neighboring regions

Can be seen, that rainfall in the European part of Russia, as well as Ukraine and Belarus is 500-800 mm, what in 2-2,5 times less than, than half of the UK regions.

At the same time, it is known, for example, of the guests 9.039 "Corrosiveness of the atmosphere", that characterize the corrosivity of the atmosphere and moisture contamination of the surface materials corrosive agents air.

This circumstance is taken into account, to varying degrees,, the appointment of the protection of aluminum building structures against corrosion in domestic building codes JV 28.13330.2012 (updated edition of SNiP 2.03.11-85), and in the latest European construction standards for aluminum structures EN 1999 (Eurocode 9).

Therefore, in dry and normal regions may allow for use in building constructions unprotected aluminum even in a polluted urban atmosphere. On the other hand, in humid regions, as well as in coastal areas, aluminum may require corrosion protection even in pollution-free (rural) areas.

admin Comments Off on The Aluminium Profiles Surface Defects Catalogue